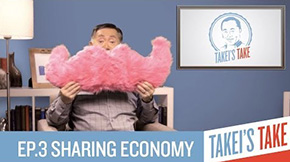 The Webby Awards are like the Oscars,Emmys or Grammys for the web industry. Think all of those wonderful internet only tv shows, radio shows, podcasts and YouTube channels. Like most award shows, the internet elite assemble for a red carpet award show in New York. The New York Times calls the Webby Awards the “Internet’s Highest Honor”.

When you think about something like the Webby Awards the last thing that probably comes to mind is the AARP. However digital, web, mobile and internet are important to the American Association of Retired Persons. Granted, every year, more and more retired people have at least used the internet at some point in their lives, typically at work.

How much are retired people using the internet? Well if the popularity of their web series Takei’s Take is any indicator, the web could be huge for that age group.  It was that web series along with “AARP’s Top Ten Technologies For Mature Drivers, that won two Webby Awards.

Hosted by actor and social media mega-power George Takei, Takei’s Take is an original Web series from AARP on YouTube that takes a smart, funny, and irreverent look at our shared digital experience. One of the fasting growing YouTube channels for the Boomer audience in 2013, the program reached nearly 100,000 subscribers in its first season and is currently in production for its second season, which will launch later this year. Takei’s Take netted an impressive twenty-four thousand subscribers in the first twenty-four hours of its launch and to date has over 1.5 million video views. AARP partners with Fullscreen, a media company for the connected generation, on the production of this original online program.

“With Takei’s Take, we wanted to take an innovative approach to reaching adults looking to learn about the latest on the Internet and the response has been outstanding,” Myrna Blyth, editorial director for AARP Media, said in a statement. “Season one’s performance has demonstrated that the 45+ audience is craving this type of content and we’re honored to be recognized with a Webby Award for our efforts.” 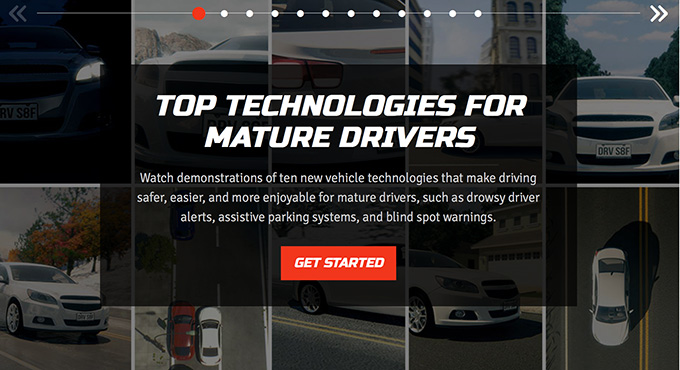 The Top Ten Technologies for Mature Drivers website demonstrates through high definition 3D animations how the best cutting-edge car technologies work that make driving safer and easier for drivers over the age of 50. Based on joint research by The Hartford and the MIT AgeLab, the website showcases, through stunning visual animations in ten beautiful environments, how these technologies improve driver safety in threatening situations such as snow storms, rain, heavy traffic and when stranded. AARP Driver Safety commissioned Cstraight Media (www.cstraight.com), a Washington DC based full-service digital agency, to design and develop the website and produce the gorgeous, realistic 3D animations. The site they produced together serves as a critical learning tool for mature drivers when considering the purchase of a new vehicle or understanding how these advanced technologies work when driving an equipped vehicle.

“Automobile technology is improving and advancing faster than ever. It’s critical that drivers educate themselves so that these technologies make them safer—not more distracted—on the road,” said Julie Lee, vice president and national director of AARP Driver Safety. “This new tool demonstrates how new technologies—such as smart headlights, blind spot warning systems, drowsy driver alerts and more—help drivers stay safe and confident behind the wheel.”

You can check out Takei’s Take here and The Top Ten Technologies For Mature Drivers here.