The U.S. is Getting Smoked in Global Bandwidth Speeds 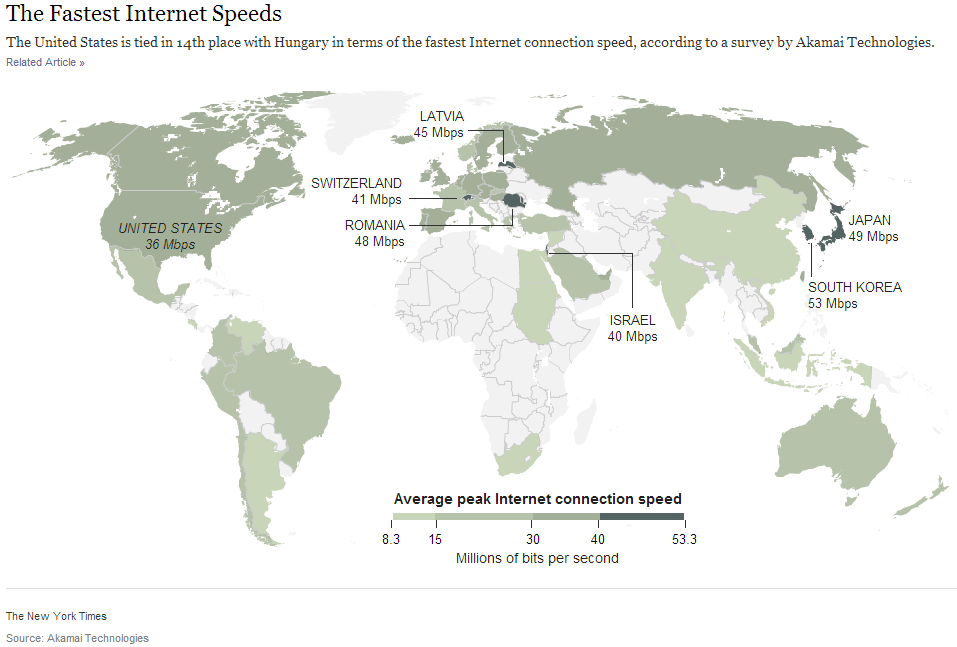 Via The NY Times

While we often think about the us as being one of the highest ranked in many of the global economic/technological indicators, a New York Times article debunked this for a key component of innovation and technological growth. According to Edward Wyatt of The New York Times, “The United States, the country that invented the Internet, is falling dangerously behind in offering high-speed, affordable broadband service to businesses and consumers.”1 This statement is backed up by  several reports.

Look at the chart on the right. The World Economic Forum ranked the U.S. 35th of 148 countries in bandwidth speeds.2 Countries like Japan, Romania, Israel, Switzerland, and South Korea are absolutely crushing the U.S. In the New York Times article, referenced above, Wyatt makes a comparison between to cities: San Antonio in Texas, and Riga, the capital city of Latvia. In what is a prettyshocking disparity, Wyatt notes: “In Riga, speeds average 42 megabits a second, but many users had service of 100 to 500 megabits as of mid-December…In San Antonio, broadband speeds average about 16 megabits a second.” 3 In terms of function, Wyatt notes that, “downloading a two-hour high-definition movie takes, on average, 35 minutes in San Antonio — and 13 in Riga.”4

While this disparity in bandwidth speeds is not reflected in the US GDP (left), the nature of it is a matter of pride. The U.S. invented the internet for crying out loud. The large telecom giants are strangling the industry, deliberately stagnating any boost in speed.5 Hopefully Google Fiber will take over the U.S. in the near future.