The Who Goes Mobile With Tommy App

Smartphones and mobile apps are becoming increasingly popular with people over 50. With a new surge of smartphone owners in that demographic more and more artists and musicians from that era are turning to the smartphone and mobile apps to appeal to their core audience and younger fans through their smartphones.

Last month we reported on “John Lennon: The Bermuda Tapes” a new interactive app that features unreleased works of John Lennon, along with stories and art from a yacht voyage Lennon took just before his death. That app has proven to be a huge hit. 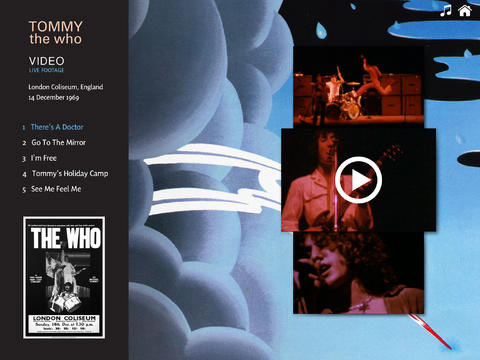 Now, we’ve learned from Gibson Guitars that The Who has released a new interactive app based on their rock opera Tommy. Roger Daltrey, Pete Townshend and Universal Music released the app last week which they call a “digital box set”

The app features a menagerie of The Who media all wrapped around Tommy. Users can enjoy the first five songs from the album free of charge, and quickly go to iTunes to download the remaining tracks. It also features five live videos from the concert “The Who Live at the Coliseum ’69”. Users can also read the first chapter of the book written by Richard Barnes free of charge, and of course download the rest of it.

And of course, it wouldn’t be an app based on “Tommy” without a pinball app. The pinball app is based on original poster art from the band’s NYC Metropolitan House gig in 1970. The rest of the app features brilliant album art (especially on a retina display) from Mike McInnerney.

You can download the Tommy App for your iPhone here.