4 Out Of 5 Dentists Are Going To Love Grush

Sure you can try Dora the Explorer, Phineas and Ferb, even Big Bird tooth brushes, but other than their favorite characters being on the toothbrush itself what fun is that? They also make electric toothbrushes for kids. Those can be fun too but what the world has been waiting for is somebody to gamify teeth brushing. Well Grush has done just that. 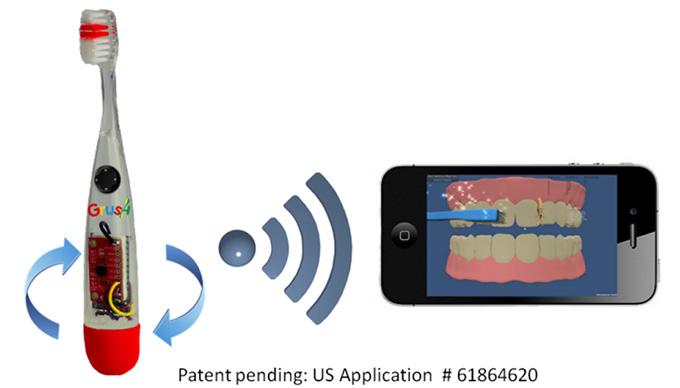 The Grush tooth brush is sensor equipped and wi-fi enabled. It’s also been constructed with the help of dentists so that it’s a good tooth brush for kids even without the gaming component. The sensorfied tooth brush is designed to fit a childs hand and comes with two brushing heads.

The games interact with the sensors in the toothbrush. But they aren’t just games, they are games that mimic teeth brushing. The Grush also comes with a universal smartphone mirror mount that allows parents to put their Android or iPhone on the mirror so kids can see the screen during teeth brushing time. The games also work with the latest versions of iPod, so if kids have an iPod they can use their own device.

One of the games shows a set of teeth. Little monsters are invading the teeth and the only way to kill the monsters is for the kid to wipe them out by brushing the teeth. The algorithms in the software, combine with the sensors so that areas that need more brushing get monsters on them.

If your kid is more musical there is an orchestra game that activates each orchestra instrument by teeth brushing. Kids can create a whole ensemble while brushing their teeth.

The final game right now is an animal brushing game that lets your kids brush their favorite animals, getting them cleaner by brushing more. All of the games work on the same idea that areas of the mouth that need more brushing are incentivized in the games themselves.

There’s also a Grush scoring center so kids can keep score and a Grush factor, ultimately making kids want to brush more to increase their factor.

The Grush Brush provides data for parents and dentists that track how long a child has brushed their teeth, how often and other crucial data points that it gathers from the sensors. All of this information is gathered and stored in the Grush cloud so that parents and dentists can access it later.

You can preorder Grush on Indiegogo right now starting at $49. Grush is nearing $20,000 of their $50,000 campaign. It’s also important to point out that unlike several other Indiegogo campaigns, The creators of Grush are so confident that people will love Grush that this is a “fixed funding” campaign meaning, that like Kickstarter, Grush won’t see a dime unless they reach their funding goal by May 18, 2014.