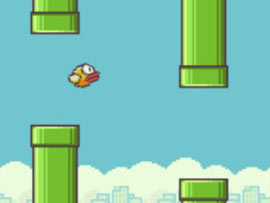 You may have heard of it.

The game enjoyed relative obscurity until early 2014, when it suddenly ricocheted into popularity, becoming the #1 app in both the iPhone and Android markets.

Then, on February 9, Dong Nguyen took Flappy Bird down.

Even though Nguyen announced the planned shutdown on his Twitter account, few people actually believed he would scuttle what was, at that moment, the most popular game on both iPhone and Android mobile platforms, a game that was reportedly making Nguyen $50,000 per day in ad revenue.

And yet, that’s exactly what Dong Nguyen did.

It’s an unfortunate reminder that, once again, anything the internet offers can be taken away. In 2009, Amazon famously pulled copies of George Orwell’s 1984 from customers’ Kindles, even though the people involved had already purchased the item. The reasoning was sound and, in fact, logical: Amazon learned it did not have the rights to sell the book. Still, it was a sour reminder to Kindle users and the internet community at large: anything that lives online, whether on your Kindle or on the iTunes app store, can disappear as quickly as it appears, and without any warning.

And then there was Google’s decision to discontinue Google Reader, possibly the most popular RSS reader available, simply because the teams at Google did not want to deal with maintaining Reader any more. Remember: even Google can take away anything it wants, at any time. (Bet that makes your Google Drive look a little less secure.)

Recently, remote access service LogMeIn announced that it was discontinuing its free plan, telling customers to switch to a paid subscription or find another way of accessing computer files remotely. This type of move, like Amazon’s decision to pull 1984, is the sort of thing that looks good on paper but comes with its own side effects.

In LogMeIn’s case, the decision to discontinue its free service may have seemed like a money-making opportunity for the company — they’d be able to save money by not hosting or supporting free accounts, and they would likely increase revenue as people with free accounts switched to paid subscriptions — but the truth is that they lost a significant amount of brand loyalty by turning off their free plan. There are plenty of free remote access programs to take the place of LogMeIn, and those companies are the ones who are going to gain brand loyalty and social proof. In the end, they may even earn more money from users who convert into subscribers, simply because they kept their free service going when LogMeIn’s free service got canceled.

As for Dong Nguyen: let’s say he releases another app game in 2014. Do you think people are going to download it? Or are they going to remember that he was the person who gave them Flappy Bird and then took it away?

Ultimately, this type of “give with one hand, take with the other” behavior will hurt the smallest companies the most, and barely make a dent in the internet monoliths. Nobody seriously stopped using Amazon after it pulled 1984, and nobody shut down their Google accounts just because Google discontinued Reader (and Wave, and Latitude, and Talk, and Knol, and Health, and Buzz, and countless other programs). You probably can’t even remember how many services Facebook has offered, and then pulled. But LogMeIn is going to take the hit, as is Nguyen, and any other smaller players who think they can follow the same rules.

And it serves as a stark reminder for today’s internet user: the internet giveth, and the internet taketh away. The services you access today may be gone by tomorrow. That adorable, frustrating bird will flap no more.