When Dr. Duncan Milne and his wife Anna Kirschberg first opened up their edtech company, Junior Learning, in 2009, they set out to bridge the world of toys with education. Both Milne and Kirshberg knew there were several toy companies out there making toys and adding in educational elements, they set out to design educational products that were disguised as toys. They call this “camouflage learning”.

All of their toys and apps are designed for kids aged 4-7 which is right when kids aren’t just starting to learn but they are learning how to learn. It’s an age when most education professionals feel kids are most easily influenced. 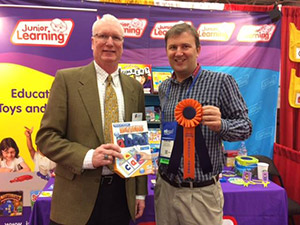 Right as Junior Learning was starting to form, the iPad was introduced. “With the introduction of the iPad, we felt that the future of childhood education was about to shift in a monumental way. Every day, children constantly flick between digital books and educational apps as part of their learning programs. Parents and teachers alike are uncertain as to what effect this will have in the long-term on kids. What we do know is that children now expect to learn and interact through digital mediums. We also know that the digital era is here to stay and Junior Learning doesn’t want to be left behind!” Kirschberg told us in an interview.

With that in mind the husband and wife team took a cue from the aisles of every toy store, Walmart and Target in America and noticed that some of the most successful toys today have both a physical aspect and an app combined for the complete experience.

Just check out your neighborhood big box store and you’ll find fishing games, race car games, Angry Birds games and many more, all that have physical pieces and an app. It’s this combined technology that’s made things like Skylanders and Disney Infinity super popular. 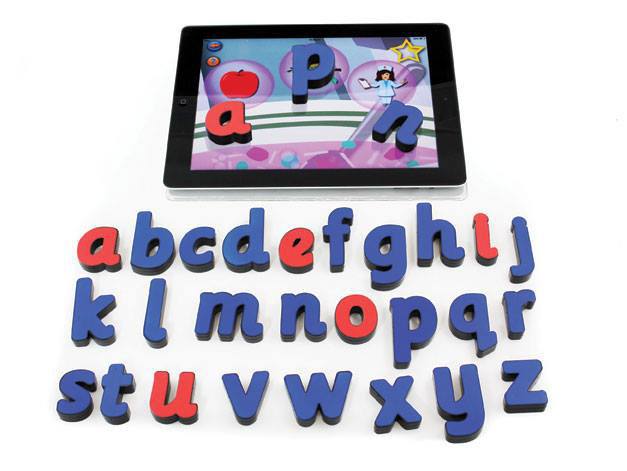 That’s why Junior Learning created TouchTronic letters. Kirschberg told us “Touchtronic Letters are the first physical classroom resource to work on an iPad. Touchtronic Letters comprise a set of tangible alphabet letters that interact directly with the iPad surface, and work with learning apps. Thus, we believe we have successfully combined the physical and digital worlds of learning for school aged children. We know that children enjoy learning with foam and magnetic letters, so why not create the next step – letters for the iPad?”

Research has shown that children learn faster when visual, auditory and tactile methods are combined, that according to Milne who holds a PhD from Harvard University. That’s the premise behind Touchtronic Letters. Children use the physical letters to match up with the actual letters as they come across the iPad screen in games. Children can also use the physical letters combined with the app to create new words and identify the sounds that help create words. When they finish all of the letters the can use the Touchtronic Letters to unlock the mystery door.

Junior Learning isn’t a fly by night company trying to ride the edtech wave. They’ve created several interactive toys that you can find at their website juniorlearning.com. They’ve also been the recipient of the coveted “Teacher’s Choice Award” from Learning Magazine, an award that’s voted on by actual teachers using these products in the field.

You can check out Junior Learning here.