Mark Cuban: Let Startups Have One License And Obama Care 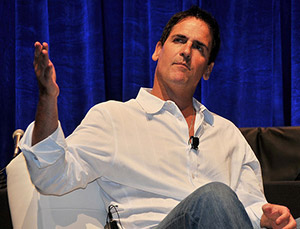 If you’re into technology or basketball you definitely know the name Mark Cuban. Cuban is the billionaire owner of the Dallas Mavericks who built his empire by starting a computer sales company, before he even owned a computer. From there he built Broadcast.com which he sold to Yahoo in the thick of the dot com bubble, and kept growing his fortune.

Cuban is one of the Shark’s on the ABC television series Shark Tank. The highly popular tv show puts startup founders in front of experienced investors and entrepreneurs who give them critical feedback and must decide if they want to invest some of their own personal fortune into their company. Inc Magazine recently posed a question to Cuban about entrepreneurship fading. Cuban responded: “That research is faulty. There is a reason Shark Tank is so popular. People are still inspired. The American dream is still alive and well.”

Cuban has often been an outspoken critic of many things. During the Donald Sterling controversy Cuban put himself out there by saying that he too may form racially backed opinions at times. Some praised this position because Cuban said what many feel a lot of Americans actually think, others were quick to judge.

The 55 year old business man and startup champion isn’t one to cave to criticism though, which is one of the reasons he’s been so successful.

In his interview with Inc magazine Cuban outlined some ideas that make harsh sense, and that would help entrepreneurs and startups focus on launching their businesses.

The first great idea was to make the business licensing system one step. In launching several businesses over the years I personally know the pain of filing for a Tax ID, incorporating in one state, getting a business license in that state and then another in a different state if that’s where we choose to operate. Cuban believes that a “one touch” business licensing process wouldn’t only help startups and entrepreneurs but small business owners as well. “There is too much bureaucracy, which creates artificial barriers and costs that complicate the process for startups and divert needed time and cash. Every license should resolve all licenses for the local and state.?” he said.

“Extend Obamacare to include any and all startups that are three years old or younger. Allow all employees to sign up at HealthCare.gov. That solves several problems for entrepreneurs. First, it allows them to quit a job they are keeping only to get health insurance. Second, it allows them to hire people who want to work for your startup but won’t unless you have full health care. Third, one of the biggest productivity and profitability time sucks for an entrepreneur is that we have to spend time trying to figure out all the different health care options and what we can and can’t offer to employees. Every second spent on trying to figure out health care is time taken away from the core competencies of our companies.” Cuban said.

When it comes to politics Cuban is an independent who often jokes that both parties are equally inefficient. This also frees him up to support candidates based on the issues that matter to Cuban regardless of party. With the next presidential election just two years away and midterms going on now, who knows we may see some of Cuban’s ideas on the table.

Read the rest of the interview at Inc.com