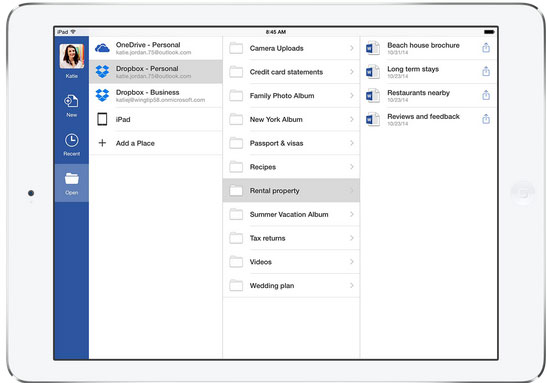 While former Microsoft CEO Steve Ballmer is busy tending to the hardwood courts of the NBA, his successor at Microsoft, Satya Nadella is hard at work making sure that Microsoft stays competitive with the ever evolving landscape of the internet. With that in mind Microsoft is trying to reposition itself in things that it’s good at like software.

Nadella knows that we live in a mobile first and cloud based world. He wants to make sure that Microsoft’s core products, like Microsoft Office, stay relevant in those environments and to do that they may have to work together rather than against competitors.  Such is the case with Dropbox a company that, despite having 100 million users, Ballmer dismissed as a “little startup”.

Nowadays Dropbox has over 200 million users and is home to over 35 billion Microsoft Office documents, according to an official Microsoft blog post.

“In our mobile-first and cloud-first world, people need easier ways to create, share and collaborate regardless of their device or platform,” said Satya Nadella, CEO of Microsoft. “Together, Microsoft and Dropbox will provide our shared customers with flexible tools that put them at the center for the way they live and work today.”

“People around the world have embraced Office and Dropbox to empower the way they live and work today,” said Drew Houston, CEO and co-founder of Dropbox. “Our partnership with Microsoft will make it easier than ever to collaborate seamlessly across these platforms, giving people the freedom to get more done.”

The main features available to Dropbox and Microsoft users are:

These changes will take place on the Dropbox mobile apps first with web platforms coming online with these changes in early 2015.  This is great news for users of both services that are looking to streamline their work flow.