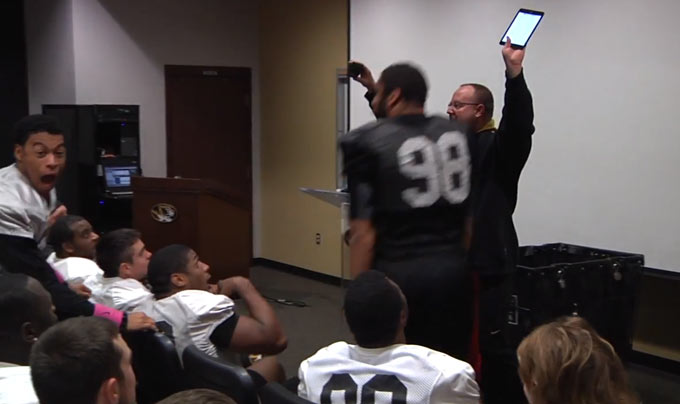 The Auburn Tigers ruined Mizzou’s chances of playing for the 2013 BCS Championship which just happens to fall 3 hours away from CES in Pasadena California on January 6th (War Eagle). However the other tigers (Mizzou) still get a chance to play in a post season bowl game.

After college football teams end their regular season and prepare for bowl games they often get showered with gifts and gear from sponsors, manufacturers and collective booster groups. This year Mizzou got treated to some sharp looking Cotton Bowl Swag. They also got treated to a hot pair of Nike shoes that match Mizzou’s color.

The entire football team lets out a huge cheer when they find out they’re receiving new Apple TV’s but they go absolutely nuts, like the audience at Oprah’s favorite things when they receive new iPad mini’s. Check out the video below.

As for the Auburn Tigers, no one knows what they received gearing up for the BCS Championship but with Apple CEO Tim Cook a proud and active Auburn Alumni perhaps they got the new Mac Pro.