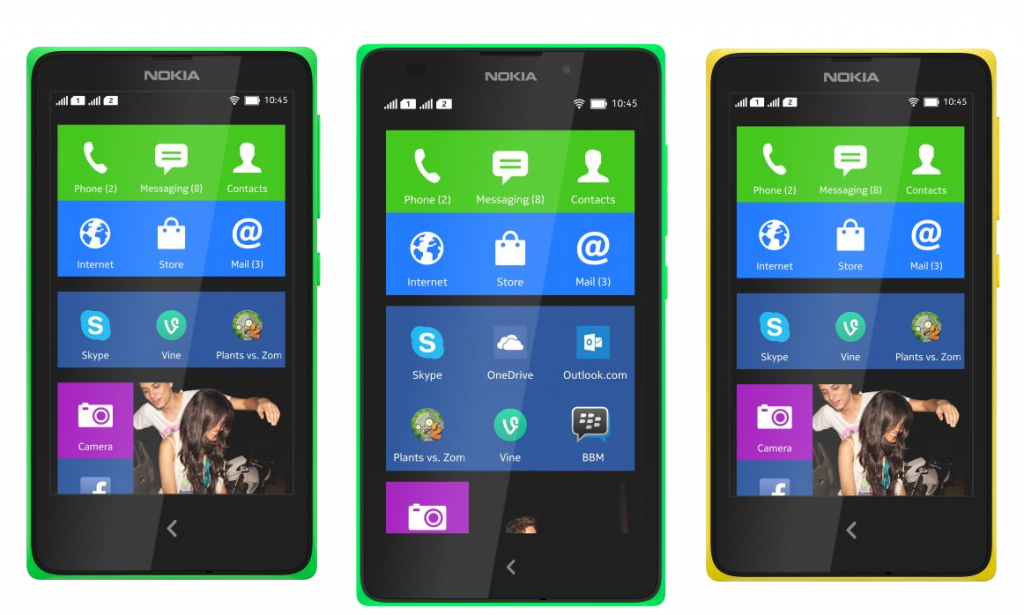 On Monday in Barcelona at MWC, Nokia announced its first three Android supported smartphones. They are the Nokia X+, the Nokia XL, and the Nokia X (above, respectively). These are not even in the same zip code as the high-end Galaxy S5 we saw earlier. That said, it is sizable first step for Nokia, who has focused on Windows Phones thus far.

Stephen Elop, executive vice president of Nokia’s Devices & Services had a few things to say in regards to the new Android phones:

Nokia has connected billions of people around the world, and today we demonstrated how our portfolio is designed to connect the next billion people to great experiences…Our deliberate approach is to offer four tiers of products including our affordable entry-level devices like the new Nokia 220; our entry-level Asha touch phones like the new Nokia Asha 230; our new Nokia X, Nokia X+ and Nokia XL smartphones primarily for growth economies; and our Lumia portfolio, which is where we introduce the greatest innovation and provide full compatibility with the Microsoft experience.1

It should be noted, however, that these new devices do not run on a pure Android OS, but rather what Nokia calls, “Nokia X Software Platform.” Further, the official press documents refer to the Nokia X line as, “a family of smartphones that run Android(TM) apps, Microsoft services and signature Nokia experiences.”2 The release went into more details about the OS:

The Nokia X family features Nokia’s renowned handset quality and design, with a fresh, tile-based user interface inspired by our Lumia family. All devices come with Fastlane, a screen which lets people switch between their favorite apps more smoothly. People can access curated, quality-tested apps from Nokia Store, more than a dozen third-party app stores and by sideloading.3

As the OS is essentially a gutted version of the open-source Android, the feel and function of the new Nokia X series will not be anything like that of other Android devices. Nevertheless, it is interesting to see Nokia play with the idea of using Android.