Turn Any Car Into A Smart Car With Onics 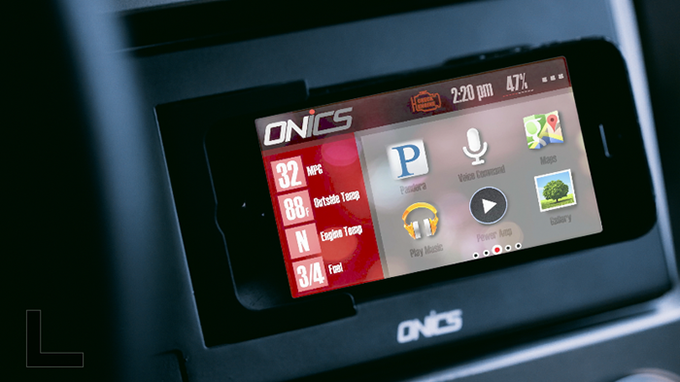 At the Detroit Auto Show last year we started noticing an interesting trend. More and more cars are coming off the line without even CD players, but USB connections, Aux jacks and Bluetooth are extremely important. This proves that more and more people are turning to their own smartphone as a way to quasi turn their car into a smart car.

People use cup holder mounts, suction cups, velcro and even the cupholders themselves as ways to keep their smartphone connected to the car and close by. There’s always a barrage of wires associated with this method. To add to that, when the driver is done driving the cords get added wear and tear as they take their phone with them.

Chad Sherwood and the team behind Onics has created a new in-dash smart system that allows the user to use any recent model smartphone as the brains, hub and command center of their smart car.

Through the use of modular, interchangeable face plates, the Onics system comes to life with the touchscreen of the latest Samsung Galaxy phones, iPhone, LG or HTC phone. No matter which smartphone the driver owns it can quickly sit as the control surface, firmly in place and connected to the car.

As the photo shows, now instead of looking at a proprietary touch screen system for a car audio manufacturer, you’re looking at your smartphone. 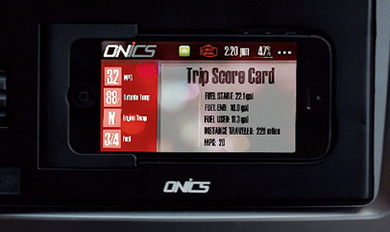 The Onics hardware is installed in your car as quickly as any double din car stereo and then the magic happens. All of the most recent smartphones have a faceplate that is fastened into the Onics system and then the smartphone is securely locked in place. One that’s done the smartphone is the brain and control for the smartcar and infotainment system.

Onics ties into your cars computer system so it can track your trip, distance, gas and even your heating and air conditioning. It truly is like having your smartphone become the head unit. How smart is the Onics system? By talking to the cars onboard computer Onics knows when you’re running out of gas and can quickly make a recommendation along with driving instructions on your Onics screen.

What makes Onics better than Android for the car or Car Play is the fact that when a new phone model comes out it too can become your smart car making your system future proof.  The Onics system has a variety of applications that control every aspect of your smart car.

Onics has partnered with Texas Instruments “to bring you the highest quality audio components and internals along with the latest chip technology.” the company said.  Texas Instruments is one of the key vendors for Android smart phones so you can be sure that Onics is top shelf.

You can find out more about Onics here.