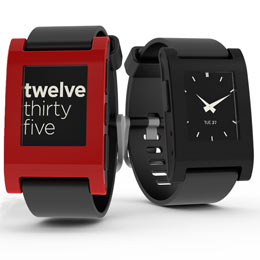 If you’re a Pebble watch owner, you’ve been waiting for this moment. Pebble has debuted their newest version of the Pebble operating system and accompanying software.

The update to the Pebble App was made available yesterday. Now, Pebble owners don’t have to search through the internet or troll through developer forums to find the latest Pebble apps.

The new Pebble software is divided into three sections; My Pebble, Get Watchfaces and Get Apps. My Pebble gives users quick access to what apps are already on their Pebble Watch. Pebble has created the App Locker, which stores new watch faces and Pebble apps in up to 8 available slots on your watch. Each watch face and app counts as  a slot so if you have a lot of watch faces you may want to get rid of some to try out the apps.

While Pebble users are used looking at an e-ink screen, the Pebble appstore is bright and colorful and looks like a major OS app store. There’s a featured app section on the top of the new Pebble app store. New apps are divided into six main areas; Daily, Tools and Utilities, Notifications, Remotes, Fitness, and Games. Of course there’s a place to search for an app and also a place to see all of the available apps in the entire app store.

Pebble users will be thrilled to find that some of the popular apps they’re used to on other operating systems are available for Pebble, like Foursquare and Yelp. Many of the third party developer apps that were floating around the internet are now all organized and available for download, first to your phone and then synced over to your smart watch.

The App Store shows apps that are for Android Pebble owners but of course you can’t download those apps on an iOS device.

Speaking of Android, Pebble had originally announced that the App Store update would be available Monday and that Android would soon follow. Well that wait is over too as Pebble has released a beta version of the app store for Android users. That update and beta version appeared in the Google Play store Monday afternoon as well.