New Radical.FM Android App Gives You 25 Million Songs, You Pay What You Want

Pandora, Spotify and Beats Music are by far the most popular streaming music apps out there. They all offer a robust catalog of music and have the ability to go premium on an ad-free, interruption free model.

Now, online music platform radical.fm is making it’s way onto Android smartphones and tablets with a radically new model. The company offer 25 million songs commercial free, you pay what you want or can.

The 25 million song library isn’t mixed up using some computer algorithm it’s actually hand curated by the user base in what radical.fm calls a “mixer board” feature.

“Compared to Pandora, whose Music Genome project remains essentially unchanged over a decade, Radical.FM has been continuously refined by passionate music experts. Radical’s ‘mixer board’ approach allows users to choose an unlimited number of their favorite music genres and assign them values relative to one another. This proven concept does not rely on complex computer algorithms, but on hand curation by dozens of industry professionals. Radical also allows users to add individual songs from its 25 million searchable tracks (versus Pandora’s 1M randomly selected) guaranteeing that a user’s favorite titles will appear on their stations.” the company said in a statement. 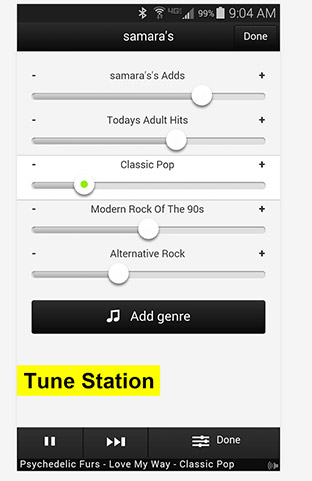 So what does a service like this cost? Well nothing if you can’t afford or don’t want to pay for it. The team behind radical.fm has setup a “pay what you can” donation model for their service, while still insisting that they are paying musicians and artists royalties.

“It’s a radical revenue model, and people wonder how we can pay music streaming’s high royalties on a free app without commercials,” radical.fm CEO Tom McAlevey said. “When I drove my dune-buggy across Africa, I was confronted by Arabic police, spear-wielding natives, and AK-47-toting militia. More often than not, they helped rather than hindered me, reminding me that if treated with respect, people tend to do the right thing. As users discover Radical’s outstanding service, many of them will be proud to support it.”

The company hasn’t said how much they’ve made with this radical approach to paying for music, but for now it appears that radical.fm may be one of the best alternatives for music fans with an eclectic taste.

You can try it out for yourself on your Android device here.