When you push the riff raff aside, including Michael Bay’s legendary onstage meltdown, Samsung announced a lot of great products at the 2014 International CES. In fact, their Galaxy Note Pro 12.2 was featured on many of the shuttle buses cruising through Las Vegas during CES earlier this month. 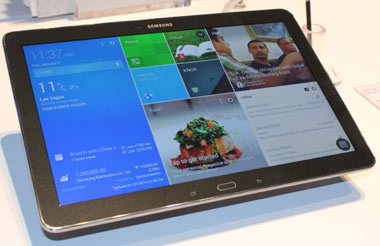 The 12.2 take on Samsung’s Phablet actually makes it a full on tablet. It uses the same “S Pen” functionality that the Galaxy Note line has used since it was introduced 3 years ago at Mobile World Congress. But the 12.2 size makes it a little harder to make it truly mobile. Of course it weighs less than a comparable sized laptop and it gives that handwriting freedom that you would expect from a device branded Galaxy Note.

The tablet is running the latest version of Android, Android 4.4 Kit Kat, and it has a great 2560×1600 pixel density making images fly off the screen.

They’ve added a larger battery to keep up with the work flow that you’ll want to put in a device this side. It also has an 8mp rear camera and a 2MP front camera. Of course it also features an LTE radio.

Engadget reported on Saturday that the Galaxy Note Pro 12.2 has made it’s way through the FCC with Verizon Wireless’ 4G LTE bands in tow. No word on Verizon pricing yet but once something hits the FCC for approval we’re typically no more than 90 days away from a consumer launch. What we can’t wait to see is how many people embrace the 12.2″ form factor.

It’s been widely rumored that Apple is planning a similarly sized iPad that would be almost a hybrid between their Macbook line and their iPad line. Samsung getting it’s feet wet in this size and form factor could prove to be valuable research for arch rival Apple.