T-Mobile Showing That Breaking Up Is Easy To Do, And An Epic Video

What started as a gentle ribbing from T-Mobile’s CEO John Legere to AT&T, ended up with AT&T offering to buy people out of their T-Mobile contracts. T-Mobile saw a huge opportunity in that and decided that they were going to help people break their contracts. But this time it wasn’t just AT&T customers. In T-Mobile’s breakup promotion, part of their new “uncarrier” strategy, the company will buy customers out of their contract with AT&T, Verizon Wireless or Sprint.

Customers from any major carrier can come over to T-Mobile and trade their eligible devices at a participating T-Mobile location. Then they can switch to one of T-Mobile’s Simple Choice plans and receive instant credit based on the value of their phone up to $300. Basically making it so that as new T-Mobile customers they can get a comparable phone on T-Mobile with spending little or no money out of pocket. Then, after the customer gets their final bill from their carrier, with the “early termination fee”, T-Mobile will give them an additional payment up to $350 per line. Customers simply upload their last bill to switchtotmobile.com or mail it in. 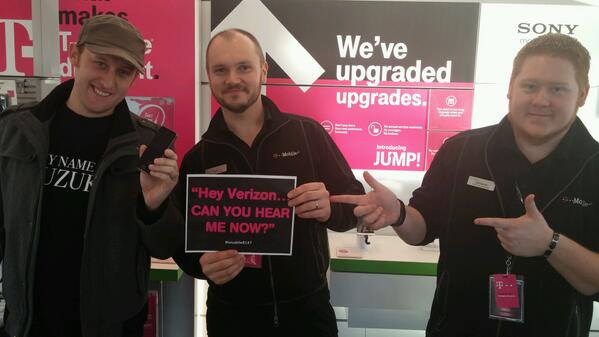 T-Mobile rocked the wireless world when they started this “un-carrier” phenomenon which just about instantly had the other major US carriers changing their upgrade requirements and their verbiage in their contracts, to also appear that they have no contracts.

So far there have been over 80,000 unique social media posts about T-Mobile’s breakup promotion. Customers from across the country are posting pictures and breakup letters with their carrier. The company hasn’t said how many customers have switched over. T-Mobile recently posted their Q4 2013 results and new customers had increased for the third quarter in a row, however that was before this promotion started.

Reports last week suggest that Sprint is inching closer to purchasing T-Mobile or at least having the cash to do it. In the meantime though it’s business as usual for big magenta and that means upping the ante in the wireless wars.