This Quote Shows Satya Nadella Actually Gets It 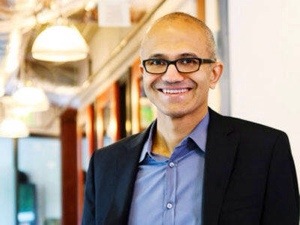 There’s been a lot of talk about Microsoft’s new CEO Satya Nadella. Nadella has been with Microsoft for 22 years, throughout most of his entire career. He’s held various executive positions within the company, most recently in an enterprise role. He’s also had the ear of Microsoft co-founders Bill Gates and Steve Ballmer throughout his career.  Those were all key factors for promoting within rather than hiring someone like former Nokia CEO Stephen Elop or Ford CEO Alan Mulally, who was believed to be the front runner.

Things are different now at Microsoft. The company once had a strangle hold on the computer world. Windows outnumbered Mac computers several times over, and everyone and their mother used Microsoft Office products. The smartphone, the growth of the internet, the cloud and open-source software have all played a part in Microsoft losing footing during the Steve Ballmer era.

Ballmer, a Microsoft lifer, had been with the company since it’s inception, helping create it with Bill Gates and Paul Allen. While Ballmer was a great CEO for a while, many feel he lost focus and part of the reason he lost that focus was he was too emotionally invested in Microsoft. Ballmer was akin to Blackberry Co-CEO’s Jim Balsillie and Mike Lazaridis who both thought Blackberry was indestructible. They had their big huge slice of the pie and no one was going to change that.

Today, Windows PC’s still outnumber computers running Mac OSX by a lot, but it’s not the desktop or the laptop that’s hurting Microsoft.

That’s where Nadella fits into the puzzle, backed with Bill Gates returning three days a week to work on product. Both Gates and Nadella know that Microsoft is a great company, it’s just time to innovate. “Our job is to ensure that Microsoft thrives in a mobile and cloud-first world.” Nadella said in an email to employees upon his announcement as CEO.

It’s great that Nadella sees the need to expand in the areas that are hurting Microsoft the most. But while everyone is tearing his email apart, one quote stuck out to me as I read it. I read the quote over and over again and realized this is where Ballmer missed it and Nadella will thrive. It’s a quote that anyone in the tech space will understand and should live by. It’s a quote that explains why Microsoft is where it is, and Blackberry has almost been wiped into obscurity.

It is this: Our industry does not respect tradition — it only respects innovation.