Sony Takes the Quantified Self Beyond Fitness With New Wearable Camera

Lifelog is at the heart of these new products. According to Sony:

With Lifelog you can view information about your physical, communications and entertainment activities. You can also set activity goals and monitor your progress. The information stored in Lifelog is collected partly using sensor technology in your Sony SmartBand SWR10 and partly via data gathered from various applications and sensors in your Android smartphone.1

While the application is primarily concerned with health and fitness tracking, it seems that there is another, more general life-tracking component in the works. According to The SmartWear Website, this goes well beyond health and fitness alone (emphasis added):

You can see how active you were, where you went, what pictures you took, where and when and how you have been communicating with your world during any day. This innovative life-tracking app will also help you gather points based on how you live and move. Lifelog even keeps you updated on what the weather is going to be tomorrow and days after.2

This is a pretty interesting concept. Sony seems to be taking the quantified self well beyond the traditional health and fitness tracking, into the more mundane, less exciting real-life tracking. This will certainly be cool, but it might end up being too dull. Who wants to know how many texts they sent one day. or how many pictures they took of their food. 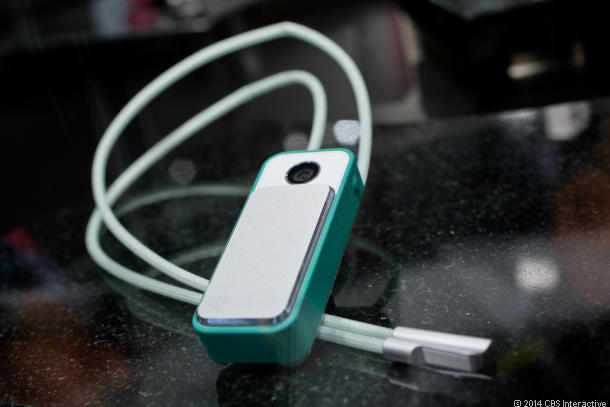 Whatever the case, Sony unveiled one component of the new SmartWear line at MWC. To the left is the new Sony Lifelog wearable camera. Although there was no release date, or any real specific info on this camera, it is safe to assume that it will play a major role in the new Lifelog push.  Essentially, this camera world work the same way as the Narrative lifeloging camera – formerly named Memoto. While the Narrative camera is pretty cool on its own, it will be very interesting to see how Sony ties the same sort of hardware into the Lifelog software platform.