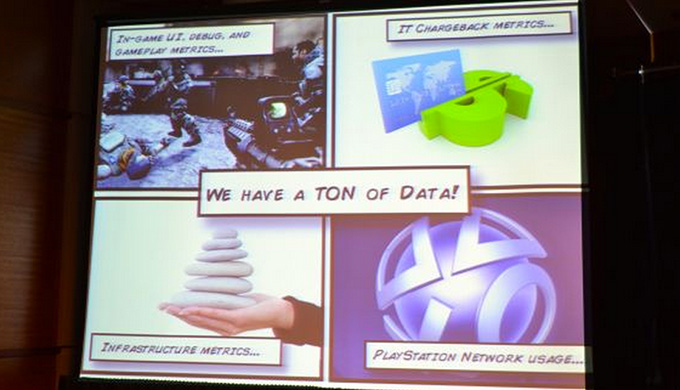 Sony played it a little different at SXSW Interactive this year. The electronics giant from Japan didn’t use the stage to pimp the latest numbers for PS4. Most of the world already knows that they are killing Microsoft’s Xbox One, (even Nintendo is). This year at SXSW they played to the true tech geek and gamer with a panel called: Playstation Data At The Speed of Gaming.

Now most people of average intelligence realize that somewhere beneath the PS3 and PS4 console systems lies a huge amount of data. Nobody really worries about it though. What Sony did was show those in attendance how they can use big data for a number of things.

Sony Senior Manager of Global Technology Services, Zane Mumford, and Hosting Experience Manager Tyler Gaede created a presentation filled with charts, interesting data and revealing facts. The panel was more like something that you would find at Comicon, Dragoncon or even E3, but it was still standing room only. People wanted to know the goods.

What were the goods?

Well Mumford and Gaede explained several ways that they use all the massive amounts of big data that is analyzed by Tableau an analytics software the company licenses for it’s developers.

Using the Tableau platform up against data from the PlayStation Network, Sony is able to spot cheaters like a sore thumb. Gaede gave a good example of a player who was at the top of the charts for Starhawk. Analyzing the data revealed that this player had played a thousand games a week cutting down the same player. Sony was able to jump into action and remove that player from the leader board.

Big data is also used for game balance. Sony can see what features in games players actually like to use vs those that are left on the backburner. Sony may find that there’s a feature no one is using, when that information is returned to the developer they could elect to improve that feature or abandon it for the next iteration of the game.

Sony’s PS4 sales are beating rival Xbox One across the globe. Once the system has been on the market for a year though both manufacturers will need to switch gears and focus more on the ecosystem created around the system. That’s where the big data plays an especially important role.