It’s been a year since T-Mobile started their national rollout of 4G LTE. If that doesn’t seem so long ago, that’s because it’s not. If you’re shaking your head and going “really” that’s probably because T-Mobile has done the fastest LTE rollout to date across all four major US carriers. They’re signing up new customers at a record pace, and they already have 96% of Americans covered by their 4G LTE network.

But there’s still time for improvement, that’s why T-Mobile announced on Thursday that they were in the midst of upgrading all over their 2G/EDGE coverage to 4G LTE. They are about half way done this project and hope to have their entire 2G/EDGE network converted to the much faster 4G/LTE by this time next year. Not only that but the company is planning a vigorous expansion across their new 700mhz A-Block spectrum as soon as the transaction is finalized.

In the midst of all this celebration though, T-Mobile CEO John Legere took a break from poking fun at rival AT&T. Legere took a step back and actually watched all of Verizon Wireless’ recent “map” commercials that show the ink blots across the country that are supposed to show the 4G LTE coverage of Sprint, AT&T and T-Mobile.

Of course if you were to go to any of Verizon’s competitors maps on their respective website, you would see what Legere saw which was a gross misrepresentation of T-Mobile’s 4G LTE service. (AT&T is also grossly misrepresented).

Legere and the T-Mobile legal team took to the courts to send Verizon a Cease and Desist demanding that they stop airing the commercials with these incorrect maps. Then in true “uncarrier” T-Mobile fashion, the company launched this commercial earlier this week, proclaiming that Verizon needs to fold up their maps.

“Right now, T-Mobile covers 96 percent of Americans, and over the past year, we’ve completely shattered records with the fastest 4G LTE deployment the U.S. wireless industry has ever seen.” said John Legere, president and CEO of T-Mobile. “Our competitors want you to believe our network doesn’t measure up. But that just isn’t true. And American consumers are going to see right through the spin and half-truths when given the facts.”

T-Mobile is on track to cover 230 million Americans with their 4G LTE by the middle of the year and 250 million by year’s end. Obviously that’s a lot more than the Verizon Wireless T-Mobile map below. 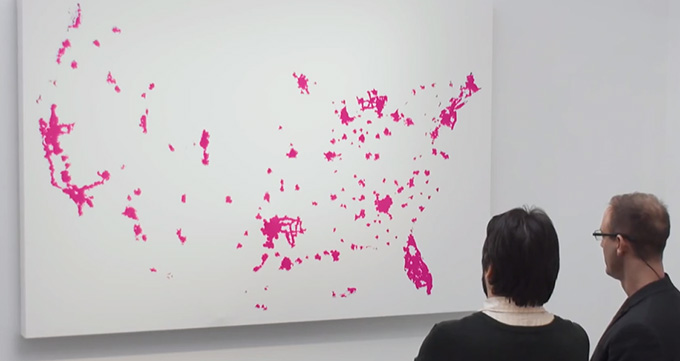 “Verizon’s ink blots massively understate our coverage and don’t begin to represent the actual customer experience on T-Mobile’s network,” said Legere. “So we’re setting the record straight – both by demanding an end to the misinformation, and by going straight to the people with the truth.”

“Through this major new network upgrade program, and other initiatives already underway, we’re driving hard toward our multi-billion dollar strategy to further improve what is already an amazing network experience for our customers,” said Neville Ray, Chief Technology Officer for T-Mobile. “Our 4G LTE is going to reach 230 million people across the U.S. by mid-year. By year’s end, we’re going to be delivering wicked-fast 4G LTE to more than 250 million people. That’s how the Un-carrier rolls out 4G LTE.”