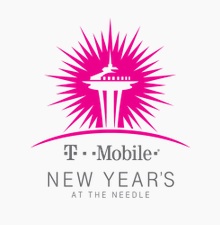 Seattle’s most favorite trademark isn’t ashamed to take major sponsorship dollars. The Space Needle, a beacon of technology, and a picturesque landscape to any in the Pacific Northwest, has been lit up different colors over the year for major events, holidays and even product launches.

In 2006 when Clearwire brought it’s “wi-max” service to Seattle, they used the Space Needle as the backdrop for their festivities with a laser light show and the clearwire color scheme and logo emblazoned on the side. It didn’t go according to plan, but nevertheless it was good enough to pique consumer interest and the press.

This year, Seattle turns to T-Mobile to light the Space Needle T-Mobile Magenta as part of New Years At The Needle celebration. As the key sponsor for the event, the Space Needle will shine magenta from December 30th to January 2nd, Tmonews reports.

“We are really thrilled to help throw a massive community party in our own backyard with such an important, iconic, global landmark like the Space Needle,” T-Mobile CEO John Legere said in a statement. “Just as the Space Needle has represented technology and progress from its inception, T-Mobile’s mission is to push boundaries and provide consumers with great value and innovation. We can’t think of a better local partner to help ring in 2014 and keep breaking the rules.”

T-Mobile has also taken this occasion to illuminate their Bellvue corporate headquarters their trademarked magenta as well.

T-Mobile is undergoing an imaging change as well these days, evolving into the “uncarrier” with four different parts of the campaign. The most recent, part four, has been revealed and is said to be a promotion where T-Mobile is paying up to $300 for customers to break their contract and move over to the fourth largest carrier in the world.

Amidst hot and heavy buy out rumors, T-Mobile continues to chug along with their plans for the immediate future. Two years ago when AT&T made a run at T-Mobile everything seemed to come to a halt, until the bid from AT&T fell through. During that period, T-Mobile gave up their top spot in the JD Power customer service rankings, a spot they held for years and have recently reclaimed.