Our 6 year old special correspondent Tatum F enjoyed playing with lots of robots at the International Society for Technology in Education conference. The first video interview she did was with a high school student who had won a Vex Robotics competition prior to ISTE.

A robot called the Bee-Bot helped Tatum learn how to program, which she thought was incredible. Learning step by stop processes and then pushing a button to watch the robot do exactly what she wanted was her first taste of programming.

She also enjoyed playing with the Tetrix Robotics robots at their booth. Those robots come in a variety of kits that are designed for middle and high school students.

But we had a hard time prying her away from the Vex Robotics booth. Vex Robotics’ Education Manager, Rich Kressley spent quite a while with Tatum teaching her how to drive, maneuver and control several different Vex robots.

Vex Robotics come in a variety of kits that start at the elementary school level and go all the way up to the high school level where the company holds nationwide competitions to see what robotics teams can create the most exciting and innovative robots.

The Vex IQ system is a “STEM education revolution”. Vex’s website says that they are designed for students starting at 8 years old and are made up of easy to snap together components. But Kressley says, as we’ve seen in the video, kids as young as five and six can just as easily put together robotic creations. 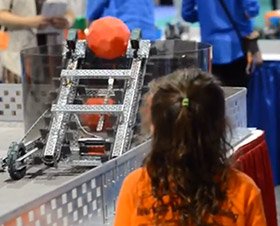 Although the Vex IQ system is easy for kids to put together Vex didn’t sacrifice features in adapting their technology to the younger set. “The Robot Brain takes high-end, powerful technology and simplifies it for educational use while keeping a high ceiling. Connect any combination of up to 12 Smart Port devices to the Robot Brain, which can then be controlled by built-in programs or programmed via a computer and compatible software program. In addition to using pre-programmed instructions, VEX IQ robots can be controlled by drivers using the Controller.” the company says on their website.

Even after the conference had ended Tatum had said that the conveyor belt robot at the Vex booth was by far her favorite.

Vex IQ can even be expanded by incorporating free graphical programming software literally meaning that the possibilities for Vex’s earliest educational system are limitless.

Vex also takes it even one step further with their Vex Pro system designed for robotics competition teams.

When I was a kid Erector sets were something you played with at home. It’s amazing to see educational construction kits like these in the classroom.

You can find out more about Vex Robotics here at their website vexrobotics.com