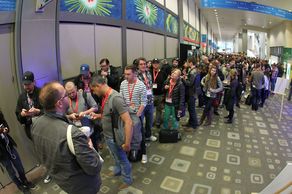 The SXSW accelerator is one of the most popular attractions at the SXSW interactive festival in Austin Texas. In years past some of the bigger high growth potential companies, like Siri, have been featured at the SXSW accelerator. This year was no different except where normally we hear about social local mobile apps and reward and engagement, this year a wearable accelerator was added to the mix, and that was where the cool stuff was.

Bob Metcalfe, the man credited with creating the ethernet platform, among other things, was on hand as an attendee and as the MC for the event alongside Brad King a professor at Ball State University.

The judges were equally intimate with the wearable space including James Park founder of FitBit, Ethan Kurzweil a partner at Bessemer Venture Partners and Eric Schonfeld, former editor at TechCrunch and currently the chief at the Demo Conference.

The companies presenting included:
Bionym who’s creation Nymi uses your electrocardiogram instead of a retina scan or fingerprint, to allow you password protected access to your devices and services. The device will cost $79 for preorder and $99 after that. It certainly is one of the most secure ways to login to something.

Wearable Solar is a company from the Netherlands that is hoping to create clothing made out of solar cells, and in turn convert that energy into useable power to power devices like smartphones and tablets. Until recently, solar powered backup chargers have been more novelty than anything else. It can take an excruciatingly long amount of time to charge a solar back up charger strictly by the use of the sun.

Skully is a company hailing from Barcelona. They’ve created a heads up technology that is built into motorcycle helmets. This puts important information in front of the riders face rather than having to look away from the road. Founder Marcus Weller talked about a time when he was trying to read a stop sign and slammed into a car in front of him, thus the need for Skully.

During the presentation King brought up the fact that as the wearable space increases there is going to become a point where companies are in competition for valuable body real estate. After the panel Metcalfe was speaking to a group of folks about another wearable revolution of sorts where companies make devices that incorporate multiple types of wearable technology.

Based on the standing room only response from wearable technology, it’s likely that this is a fixture in the SXSW Interactive programming for the immediate future.