Samsung Spills The Milk At SXSW 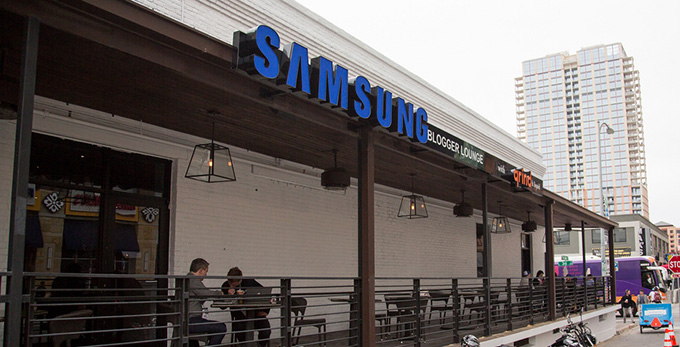 Slacker has teamed up with Slacker Radio to launch the latest entry into the world of streaming music. The space itself is getting crowded with mainstays Pandora, Spotify, and even Slacker Radio holding a dominant role amongst new comers like Beats Music.

Slacker Radio and Samsung often have a huge presence at SXSW in Austin and that held steady this year with Slacker’s big ole trailer covering both the Interactive and the Music portion of the festival (which doesn’t officially kick off until Wednesday). Samsung will also stay through both parts of the festival. They were even in town for the SXSWedu festival where they launched two new Google Chromebooks.

As for Milk Music, it’s a new free service exclusively for users of the Samsung Galaxy series of smartphones and requires no username or password. It’s being powered by Slacker Radio’s already established system.

Users of the new Milk Music are guided through the experience with a FM tuner typed interface that allows users to select through varying genre’s of music. There are normal hit based channels, rock channels, alternative, rap, and Jazz but they can go deeper catering to folks who like more niche styles of music. There’s an underground hip hop station called BackPack Rap and a cool dance station called DayTime Dance.

Users may skip up to six songs per hour per station so if you like to randomly flow through stations you aren’t stuck listening to a song you don’t like. Users can also rate songs which will provide even more like songs during the listening experience.

Samsung is feverishly working on a way for users to click to buy music from both the Samsung Music Hub and the Google Play Store.

Samsung’s Milk Music service is commercial free. Ryan Bidan, Samsung Mobile’s director of product marketing saif “We heard from consumers that there were too many ads and interruptions on free services, and that set-up could be a pain with log-ins and navigating spreadsheets,” he says. Plus, “we wanted it to be identified as something completely different. We didn’t want it to be super corporate or Samsung-y because it’s not meant to be. We wanted a name that spoke to how we felt about music inside the application, the idea of being fuzzy and nice — you know, like mother’s milk.”

Milk Music has been in the works for over a year starting with the acquisition by Samsung of the mSpot music service. That, coupled with Samsung Music Hub and Slacker are the three components that brought Milk to life. Samsung reportedly has 200 million Galaxy device users worldwide but would not comment on the number of users in the US. For now, Milk Music is only available in the US while the company looks to establish more global music licensing deals.

Samsung has decided to go all in on Milk Music. Darren Tsui VP of Music at Samsung Media Solutions told Billboard Magazine “We’ll be working with the industry from several diferent angles, from the marketing side and from a content perspective,”

Samsung has chosen SXSW to kick off Milk Music with a very heavy advertising campaign. They are also hosting a concert next Saturday at SXSW Music where they will most likely highlight one of Milk Music’s featured artists. Last year, Samsung shocked the SXSW Music audience by hosting a Prince concert.