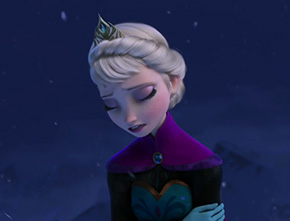 A video is beginning to go viral on the internet. This is nothing new.

What is new is that the video features a group of new United States Marine recruits in a day room watching Frozen. They’re even watching the “singalong” version and they’re singing along.

The concept of the video is remarkable, showing the lighter side of Marines. It’s also a testament to how Disney movies transcend all age groups and demographics. It’s part of that Disney Magic.

Reaction internet wide, to the video has been remarkable as well. A woman who called into a radio station in Norfolk on Friday morning was almost in tears talking about the video, feeling some sense of relief that her husband could possibly be watching Frozen also, a movie that her daughter has had her watch umpteen million times.

So I must admit, I watched the video of the Marines at least a dozen times. I too have a six year old daughter, we saw the movie in the theater twice, purchased it on the day it hit the stores and then had a party on the following Friday for 20 of her closest friends to watch it.

I too felt a strange emotion come over me watching these Marines enjoy such an epic movie, but I couldn’t get over what happens at 2:20. I watched just that part, rewinding it to about 2:10, at least 50 times.

That’s when I decided to hop on my Inmotion SCV and head over to my neighbors house. My neighbors are career, retired military, also with daughters, also who have watched Frozen several times. I asked my neighbors why on earth the Marines went nuts.

Does Elsa make some motion with her arms that is a Marine symbol? Is there some kind of underlying Marine related message at that part. No it’s a little simpler and a littler cooler than that.

My neighbor, a retired female E-7 in the US Air Force, explained, the group of Marines look to be new recruits in a day room. When they make their way into the Marines they have 13 weeks of bootcamp, often dubbed “13 weeks of complete hell”. Although all branches have rough boot camps, the sentiment seems to be that the Marine bootcamp may be even a little more intense.

At 2:20 Elsa goes into her final stanza of “Let it go” she undoes her hair and lets it flow.

Mission accomplished these recruits have seen a woman during bootcamp with their hair down.

Now of course they could probably flip through the cable box and see a woman in a bikini but the fact that they celebrate this during Frozen is amazing unto itself, because remember they are the few, the proud, the Marines.