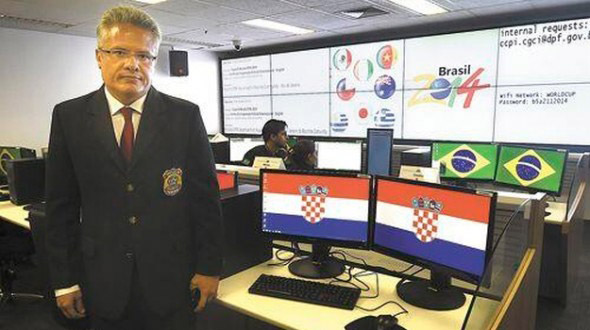 If you’re lucky enough to be in Brazil attending the 2014 World Cup and you need internet access, you may have had your chance to jump on the official World Cup Wifi.

Geek.com reported on Thursday that a little photography faux pas resulted in the internal wifi password for the World Cup Operations center getting leaked across the web. A photographer was able to shoot the picture of the gentleman above in the official operations center for the World Cup. Although hard to see, the SSID and network key for the operations wifi is displayed on the whiteboard to the right.

The photo spread across social media like wild fire with many people making sure that they labeled it accordingly. One tweet said “Free world cup wifi”. At this point though, it appears they’ve wised up and changed the password. They’ve hopefully restricted access to the operations center as well.

There’s no telling how many people actually tried to access the network or how many were successful. Chances are if they were successful they only wanted free wifi, however that could have made the World Cup network susceptible to hackers. Though, those hackers would have had to have been close enough to get on the wifi network.

This isn’t the first time this has happened at a huge sporting event. During this year’s Super Bowl their operations center wifi password was broadcast to millions on CBS. Security was so tight at this year’s Super Bowl that an entire segment was devoted to talking about the operations center at MetLife stadium. During almost 30 seconds of that footage the cameraman was just about deadpanned on the wifi password.

Word to the wise, a visible sign where there could be any cameras, or even the wrong people, is not a good place for your wifi password.