China has a new King. Samsung has been dethroned by Xiaomi as the leading smartphone vendor in China. What’s more, Samsung also lost the top spot in India:

Xiaomi Corp. became the largest smartphone vendor in China during the second quarter, while Micromax Informatics Ltd. topped Indian mobile-phone shipments, according to data from research firms this week. In both cases, Samsung fell to No. 2.1 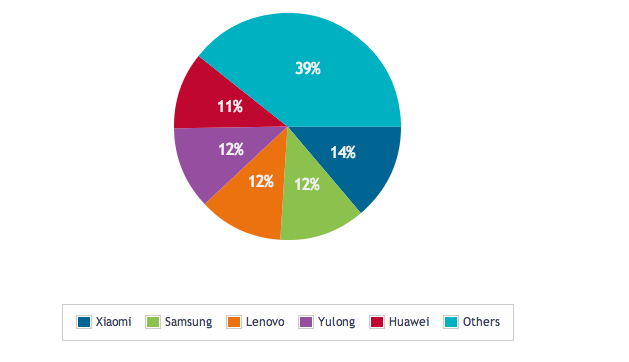 The fall from the top for Samsung, at least in China, has less to do with Samsung, and more to do with Xiamoi’s meteoric rise. According to CNN Money, Xiamoi’s 14% market share in China translates to. “15 million smartphones, a 240% improvement over the same period last year.”2 Further, DigitalWack argues that Samsung’s fall is more a result of their secondary offerings, those beyond the Galaxy line of handsets:

Earnings and shipments at Samsung are shrinking as consumers increasingly look past its Galaxy devices to local makers selling inexpensive phones. Xiaomi keeps prices down by selling through its website and tapping social media to create Apple Inc.-like buzz, while Micromax offers models with longer battery life and dual-SIM capacity in a market where wireless carriers don’t subsidize phones.3

Though analysts are expecting Samsung to rebound in China, they are less optimistic in India. As Samsung continues to focus on the high-end market – not just in phones, but really all of their products – it should come as no surprise that their lesser offerings can not keep up with their competitors.