Wait This App Is Causing Bullying In Schools?

It seems that last year whenever the words bullying and app were mentioned together it was to tout some new app that was helping kids report bullying or delivering anti bullying anecdotes. That’s not the case with a new anonymous, localized social networking app called Yik Yak. In fact it seems to be the bullying app of choice for students in Alabama’s Jefferson County.

Fox 6 WBRC reported on Wednesday that Jefferson County Deputy Mike Yarborough has found a new app of choice for the cyber bullies. That app, Yik Yak, takes just a few seconds to download. After it’s downloaded users are immediately brought into a localized, geofenced social network. Meaning that it’s perfect for kids in a school to use to anonymously bully other kids at the same school.

“When you download it, you don’t have to have a user name,” Yarborough explained to Fox 6. Which is why students in Hoover, Clay and Thompson Alabama, all suburbs of Birmingham, are using the app.

Anonymous apps seem to be all the rage these days. We just reported on a new anonymous social network but the goal in Duvamis is to solicit totally serious topical advice on things and get interactive without having to show your face, or rather your name. Last month we took an indepth look at Whisper, the anonymous instagram network that seems to actually be helping people rather than hurting them. 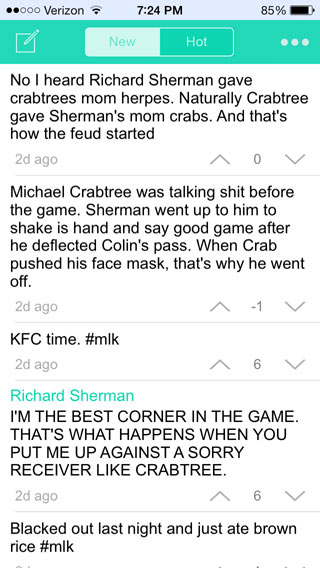 It seems that the general ebb and flow of Yik Yak is more along the lines of just random talk and sometimes crushing on someone but of course that isn’t always the case.

In checking out the app there was a lot of small “crap talking” about this past weekend’s NFL playoff games and a couple of yik’s about hot girls. But it didn’t take too long before we saw one that was presumably about a student of some sort. Combing through the history we found a bunch more that were definitely not appropriate to show here. 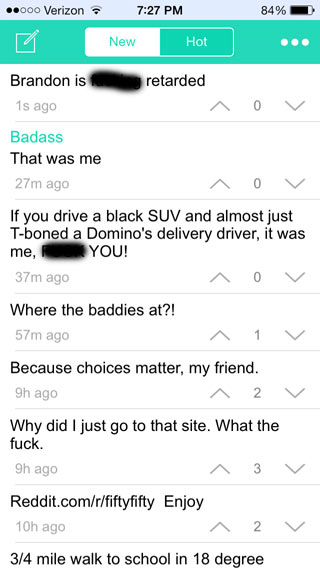 Bullys are going to be bullys no matter what but technology is making it easier to hide behind secrecy which is exactly why Yarborough is worried that a Yik Yak post could lead to a tragic event.

“Depending on how seriously cyber bullying is taken these days, I believe this can be very dangerous. I mean we’ve had here locally children commit suicide because of people bullying them and this is a very easy way to bully people,” he said.

Yarborough recommends that parents monitor which apps their kids are downloading. He also recommends one joint family account for downloading apps.