Twitter has 215 million monthly users and 100 million daily users. It’s an extremely popular service. But would it surprise you to find out that most of their board of directors doesn’t use Twitter.

Business Insider reported on Thursday that Twitter’s newest board member, Marjorie Scardino, former CEO of Pearson, tweeted for the fist time this week.

Twitter’s 5 non founding, non executive board members have tweeted less than 1500 times, all together. Those board members include Peter Fenton, Peter Chermin, David Rosenblatt, Peter Currie and of course Scardino. Jack Dorsey (co-founder and Chairman), Evan Williams (co-founder) and Dick Costolo (CEO) have tweeted a collective 30,000 times since Twitter’s inception. That actually seems kind of low as well.

Now Business Insider’s Jay Yarrow does concede the fact that many active Twitter users do sit back and read tweets, so if that’s the case it’s actually a good thing, but still with four out of the five non company board members tweeting less than 100 times total, that makes you wonder how much they actually know about the product that they’ve invested in.

Twitter has been in the news just about daily since they went public. There are a lot of people gambling on the success of Twitter and the hope that their revenue streams justify their huge valuation.

Check out this Business Insider Chart of The Day from Thursday: 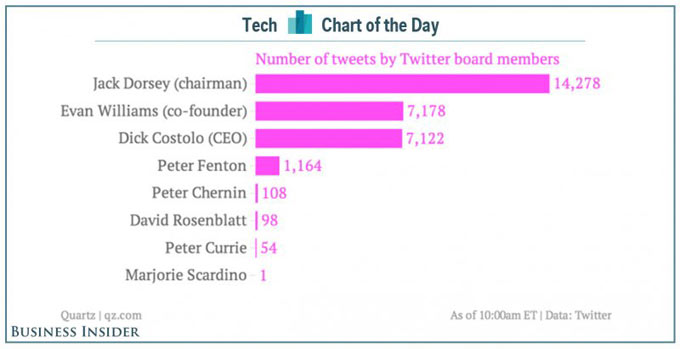