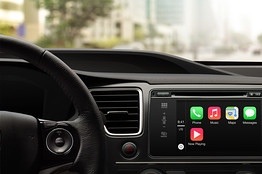 We reported on Saturday that Apple was planning on launching it’s in-car service this week. As expected Apple announced “Car Play” Monday morning.

The new Car Play system allows drivers to use and control features that they are used to in an experience very familiar, putting functionality you’re used to seeing on an iOS device front and center in the dash.

CarPlay will debut at next week’s Geneva auto show in vehicles from Ferrari, Mercedes Benz and Volvo. Apple says they have another dozen or so manufacturers lined up and Jaguar, Hyundai and Honda will have vehicles with the CarPlay system by year’s end.

CarPlay will require an update from the current iOS 7 and be available to users with compatible cars who have an iPhone 5 or newer.

Apple announced a handful of software (app) partners for the launch. Google Maps and Pandora though, were left out in the cold.

Google Maps is pretty obvious. Google is on their own crusade to dominate the car market, launching their Open Automative Alliance initiative earlier this year.

Apple also has a maps program of their own. Despite falling under ridicule when first introduced, to the point that Apple CEO Tim Cook, issued an awkward apology inviting users to use other mapping apps like Google Maps while they worked out the kinks, Apple Maps has gained a stronghold with iOS users.

The move to not have Pandora as part of the CarPlay experience is a different story. Pandora is the most popular streaming music app. They also have partnerships with many after market car radio manufacturers like Pioneer, Kenwood and Sony which integrate the head unit with a users phone to
control Pandora with their radio’s buttons.

For now, when CarPlay is introduced users can choose from the Beats
Audio service, Spotify and of course
iTunes Radio.