Arby’s Uses EBay To Get Their Hat Back From Pharell

When Pharell appeared on the Grammy’s this year, for once he wasn’t outdone by his good friends Daft Punk and their space suite. Pharell rocked an amazing hat that became all the talk of the week, even yielding it’s own Twitter account @pharellshat.

Early on many people noticed a huge resemblance between Pharell’s headwear and the hat that is synonymous with all things Arby’s. Many an internet joke went around about people feeling hungry for a beef and cheddar anytime a pic of Pharell’s epic hat were shared.

Arby’s seems to have agreed that Pharell had their hat.

At the same time, Pharell, who likes to get involved in charity work, decided to auction off the Grammy night hat on eBay.

The auction ended this past weekend with the top bidder winning with a bid of $44,100 dollars. Pharell is donating all the money to his charity organization From One Hand To anOTHER which focuses on helping at risk youths between ages 7 and 20.

Well it turns out in a tweet posted Sunday, that Arby’s was the winner of the auction. Pharell tweeted a thank you to the winner (pictured above). Arby’s immediately responded joking about buying their hat back. 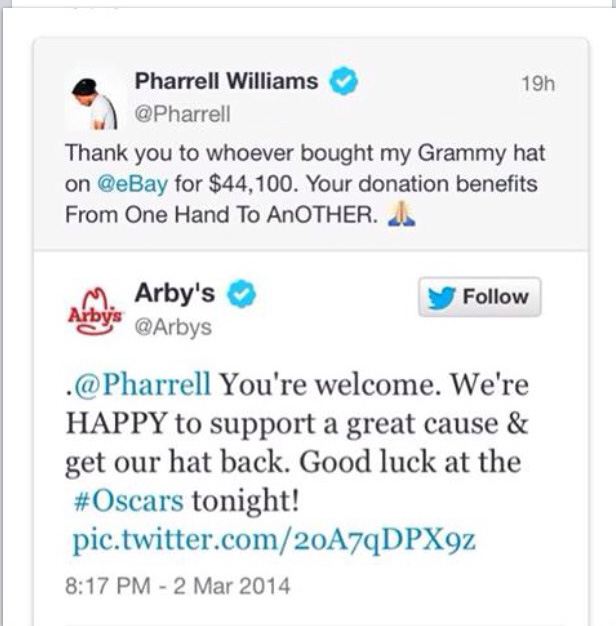