What! BuzzFeed Was Plagiarising?

Popular viral content site Buzzfeed found themselves under the spotlight for plagiarism late last week. The issue started to come to light on Thursday, reports The Huffington Post. Two twitter users, @blippoblappo and @crushingbort began posting instances where Buzzfeed editor Benny Johnson was quoting other works verbatim without attribution, on their site Our Bad Media.

For the two behind Our Bad Media it was just about calling Johnson out for being hypocritical. On Wednesday morning Johnson had posted via his Twitter account “Copying and pasting someone’s work is called plagiarism” as you can see in the Tweet we screenshot from Our Bad Media. 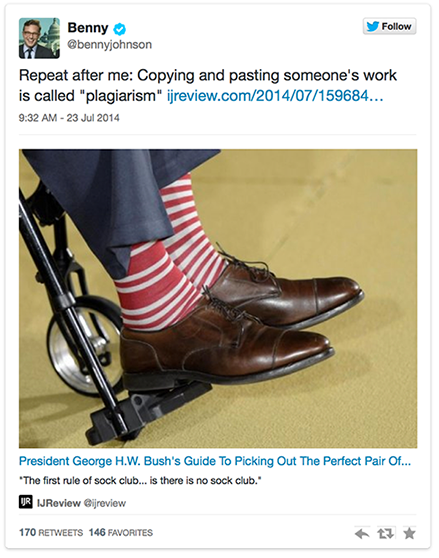 The tweet has since been removed from Johnson’s personal feed.

By Saturday Johnson had been fired from BuzzFeed and editor Ben Smith in a note to readers said: “Plagiarism, much less copying unchecked facts from Wikipedia or other sources, is an act of disrespect to the reader,” Smith wrote. “We are deeply embarrassed and sorry to have misled you.”

Smith had said that BuzzFeed found 40 instances where Johnson had copied something verbatim from another site. The Huffington Post found an instance that @blippoblappo and @crushingbort had missed in an April 2014 article about Fort Hood.

Gawker had discovered that several pieces had gone missing from the BuzzFeed site which BuzzFeed attributed to a change in editorial policy. They also said that none of Johnson’s 523 posts had been modified during that review.

Before BuzzFeed Johnson had worked for Brietbart and for Glenn Beck.