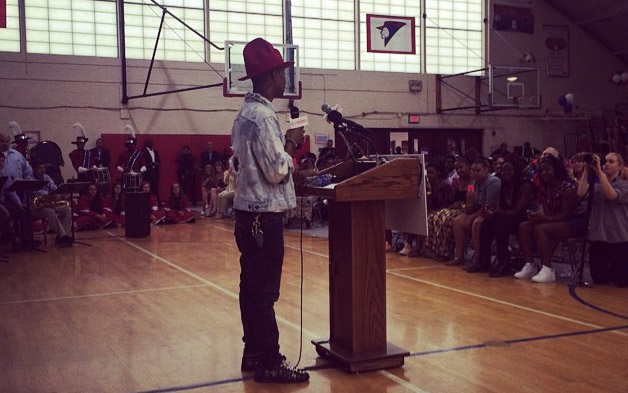 EverFi, one of the leading EdTech companies in the world, and Grammy award winning producer and performer Pharrell Williams have a lot of things in common. One of those is the fact that they are both everywhere all the time. It’s how Pharrell grew into a culture sensation and how EverFi went from the back of an RV to one of the most influential educational technology companies in the world.

It was education that brought Williams and EverFi together at a very significant event for the 41 year old superstar.

Everyone is familiar with Williams and it’s not just for his megahit “Happy”. For the past few decades Williams’ music has been the soundtrack to many lives. From the chorus of Mystikal’s “Shake It Fast” to “Drop it like it’s hot” by Snoop Dogg and one of my favorites, Grinding by the Clipse, featuring Williams partner in music Chad Hugo, collectively known as the Neptunes.

But before I go on another retro musical rant. What’s most important is why EverFi brought Williams back to Princess Anne High School where he graduated 22 years ago. It’s also the high school that William’s buddy Brandon “Shaggy” Stokes graduated from as well. 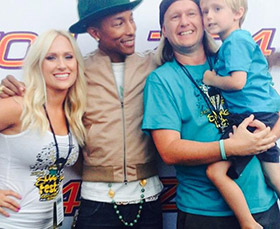 Radio station Z104 morning man Brandon “Shaggy” Stokes along with his son Brody and Williams. Williams has tasked Shaggy with continuing the conversation about education (photo: Brandon Stokes via Facebook)

Williams was in Virginia Beach on Saturday night to perform at ShaggFest, a festival concert hosted annually over the last four years by Stokes and the radio station he does the morning show at Z104. Stokes stood on the stage Saturday evening to introduce Williams and told a story about how Williams was very supportive of his idea for the concert which has featured a national act every year along with a host of regional and local performers. It was in this fourth year that Williams finally called Stokes and said it was time, and Virginia Beach was ready for him to come home.

While Williams was pretty amped up about the concert performance, he even mentioned it on a Today show appearance earlier in the week, he was equally as “Happy” to return to Princess Anne High School in front of a group of 500 students who won a lottery to see the performer.

Williams received a key to the city at the High School event but even more importantly was the reason for the event.

Through Williams’ educational non-profit From One Hand To Another FOHTA for short, he teamed up with EverFi to launch a summer of innovation camp focused on STEM initiatives for underserved children in the Hampton Roads community.

EverFi offers online courses and curriculum for students of any age, from K-12 all the way up to continuing education. They partner with corporations so that they can offer these curriculum choices to students for free. But we aren’t just talking about the basics, they offer courses in financial education, STEM education, civic engagement, and health and wellness just to name a few.

EverFi’s investors read like a who’s who in the venture capital world including Amazon’s Jeff Bezos, Twitter’s Evan Williams, Google’s Eric Schmidt and Rethink education. But all this came after a cross country road trip from the nation’s most impoverished inner cities, to indian reservations to the fields of the Mississippi Delta and beyond. The EverFi team, who took this trip in 2008, helped uncover the toughest issues that put pressure on students and their families.

Pharrell has often commented about those same issues when speaking on behalf of his FOHTA and when talking about his past. Even on the stage at Princess Anne High School, according to HamptonRoads.com, Williams admits that he wasn’t always the best student and that he needed the nurturing and pushing from teachers that he received 25 years ago. He also realizes that the kinds of teachers he had then are few and far between now, for a number of reasons, reasons he hopes FHOTA can address.

Williams has also called on Stokes to return the favor he did by helping to engage his listeners in discussions about giving teachers higher pay and better recognition. A theme he hopes will echo across the country.

You can find out more about EverFi here.