Netflix To Focus On Home Delivery Again With Drones, LOL 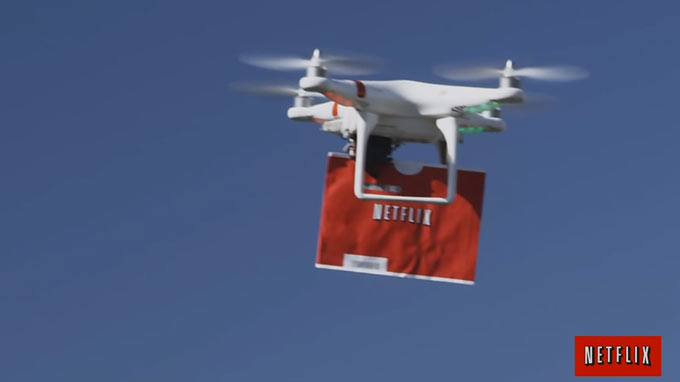 Jeff Bezos is obviously an intelligent man. He created Amazon which is by leaps and bounds the largest e-commerce site in the world. Amazon has changed several industries and revitalized delivery services globally. Bezos has also invested in several successful startups and personally bought the Washington Post in hopes to turn the newspaper around. That’s why, when he announced he wanted to deliver Amazon Prime packages on the same day, utilizing drones, people didn’t think he was completely nuts.

However, as The Verge and several other sites have pointed out, the day we actually see drone delivery of Amazon packages is still a long way away.

That doesn’t mean other companies, and websites can’t poke fun at the idea. Back in December, Orbotix, the Colorado company behind the Sphero ball, poked fun at Amazon with this video of the new “Amazon Prime Ground” service, utilizing Sphero balls to load, package and deliver small packages.

Now, Netflix has joined in the fun with their own video. Netflix has put their own DVD delivery service, the service that introduced them to the market, on the back burner. These days they are focused on streaming content and also creating content like House of Cards. However they do still have DVD customers. In fact the company’s General Manager of the DVD division, Hank Breeggemann is looking for ways to revitalize the red envelopes that used to bring nightly joy to families across America.

In the latest Amazon drone delivery parody video, Netflix introduces Drone 2 Home, a new service that delivers DVDs to customers within minutes, presumably the same amount of time that it would take to start streaming your favorite content on the Netflix service.

What’s even funnier is that the drones find the DVD customers wherever they may watch a movie (or at least part of one). The Drone 2 Home service will deliver DVDs to cars, bathrooms and anywhere someone may want to watch a movie.