Among the topics covered during Samsung’s Unpacked event from Mobile World Congress was the newest iterations of the Galaxy Gear devices. We  already told you a little bit about the new Gear 2 and the Gear Mio, but the Gear Fit was officially announced at Unpacked. The Gear Fit is a major step for Samsung, and smartwatches in general.

The Gear Fit features a 1.84-inch curved Super AMOLED display, and weighs in a 27 grams. The Gear Fit features the same  IP67 water and dust resistance levels of the new Galaxy S5. Also, the device boasts a battery life of up to 4 days. Still, all pretty standard stuff. 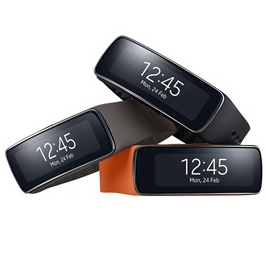 According to Samsung’s announcement release:

It provides much more than an everyday fitness band, keeping consumers up to date instant notifications from Galaxy smartphones such as incoming calls, emails, SMS, alarm, S-planner, 3rd party apps while consumers are on the move so they can stay connected. Changeable straps in Black, Orange and Mocha Grey will let users express their individual style, changing the look of the Gear Fit to match their outfit or mood for any type of activity.1

This departure from the normal FitBit and Nike Fuel health bands represents a major shift in the wearable market. If consumers are in the market for such a device, why not spend an extra $20 or $50 for the upgraded experience of the Gear Fit.