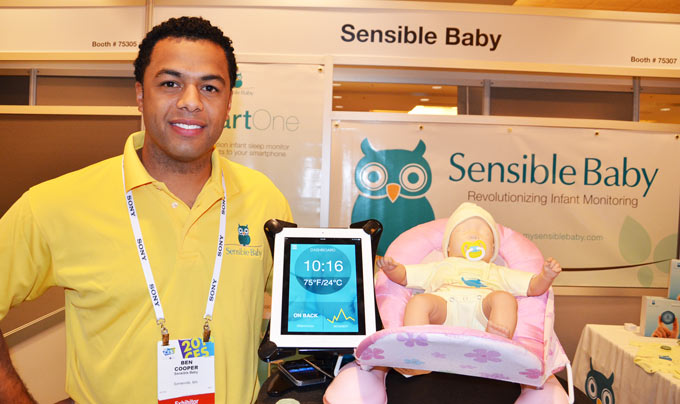 The internet of things has made it’s way to new borns. A Boston tech firm called Sensible Baby has released a new sensor/app combination called SmartOne that helps parents with a newborn baby rest easier. Who knows what these parents did before smartphones and sensors were invented.

Ben Cooper, the founder of Sensible Baby was at CES 2014 showing off the onesie that includes a sensor that can monitor the orientation your baby is laying in, the temperature in the room and your baby’s movement. Gone or the days where a new parent could run the risk of waking the baby up by just checking to see if they’re sleeping, and sleeping well.

The Bluetooth enabled sensor portion of SmartOne slides into a baby’s onesie. It then syncs with an iOS app on a smartphone. The sensors and three onesies should be available from the company by the spring and retail for around $150 for the whole set.

All of this came about as a result of SIDS or Sudden Infant Death Syndrome. SIDS is the third leading cause of infant mortality in the US with over 2,000 deaths reported in 2010, 918 as cause unknown, and 629 as accidental suffocation and strangulation in bed, according to the CDC.  This is such a concern for parents of newborn babies that many parents say they sneak into their infants bedroom multiple times in the evening, after the child has gone to bed, to make sure they are still breathing.

SmartOne takes the guess work out of that. It’s a great compliment to a baby monitor. “Even the best baby monitors have background noise that drowns out a baby’s breathing” Brenda Clark a pediatrician in Silver Spring Maryland told us.

Sensible Baby’s app allows parents to decide which alerts and notifications they want. They can be notified if the room temperature around the baby changes. They can also be notified if the baby flips over or if their breathing patterns change. All of these are factors that could alert a parent to something serious.

Find out more at mysensiblebaby.com