Put Soap At The Center Of Your Home Networking Universe 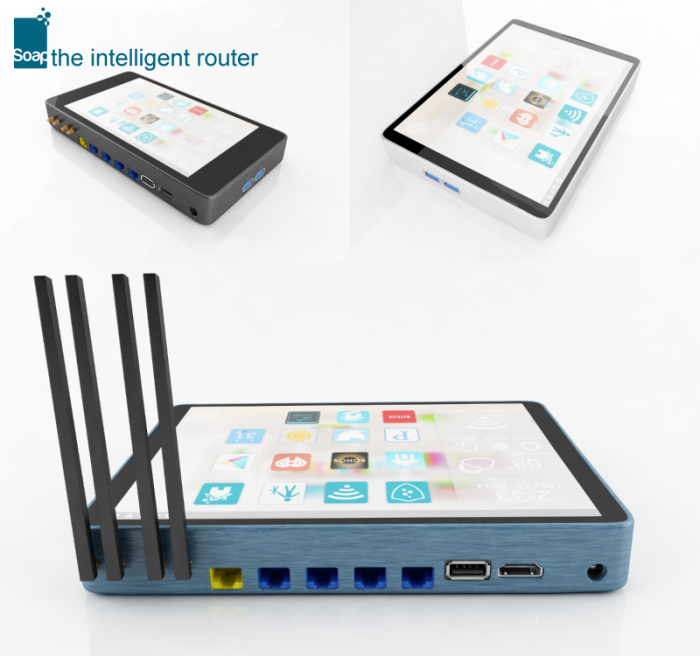 This is the Soap Router. You instantly notice one major upgrade, it has a screen, but it has much, much more under the hood:

most people look at their router as a boring simple device that they would prefer hide away. Soap is the first router that actually has brains, and can do much more than routing. Soap simplifies home automation, keeps your kids safe online, protects your home network from threats online, and not to mention with its seven inch display its not to bad to look at either.1

Much more than just a router, Soap acts as a home automation hub, consolidating all of your services into the Soap.

With Soap, there is no need to have a hub to communicate with each and every home automation device you have.  Soap has all the top home automation protocols built right in; ZIgbee, Z-Wave, Insteon, Bluetooth 4.0, X10 RF, 433mhz, plus many many more.

Not only will Soap boast more hardware for home automation than any device on the market, it will also offer the Soap Automation app that has the ability to control all your connected devices from an easy-to-use app.

With the recent announcement of the Apple Home Kit, you will now be able to control your Soap device with Siri.  “Siri, please close the garage.2

The Soap Router is powered by Android 4.4 (KitKat) and has full access to the Google Play Store. What’s more, the device ships with several incredibly useful apps built right in:

Soap Guardian:  This will give you the ability to monitor what your children do online, and control when and how they access the inter

Soap Security: This will be essential to protecting to your home network from malicious attacks like malware and viruses.

Soap Wi-Fi: Soap Wi-Fi gives the Soap the device the ability to be a router, it will include all the basic functionality that a high end network router should have. 3

Currently, you can still pre-order a Soap Router at the early-bird price of $240 – escalating to $250 when the early bird deals are gone – from their Indiegogo Campaign.