Sprint’s Getting Closer To Buying T-Mobile 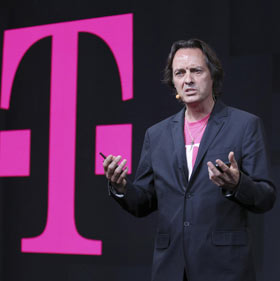 If internet reports are true, Sprint is inching closer to being able to purchase T-Mobile USA from Deutsche Telekom. The third largest US carrier (Sprint) has reportedly had the intention of purchasing the fourth largest US carrier (T-Mobile) for the past six months or so. Reports surfaced on Wednesday saying that Sprint and SoftBank have secured $50 billion dollars to turn that into a reality.

If you’ve been enjoying T-Mobile CEO John Legere’s aggressive, tongue in cheek and guerilla marketing efforts, those days may soon come to an end in favor of Dan Hesse’s more wholesome midwestern style of running things.

Right at the onset of the 2011 CTIA mobile conference in Orlando Florida, T-Mobile’s biggest rival AT&T had tried to purchase T-Mobile. That deal was thwarted by regulators in early 2012 resulting in AT&T paying T-Mobile $3 billion dollars in a break up fee. A fact that Legere likes to rub in every chance he gets.

During 2011 and 2012 while the AT&T merger looked like it was going to happen, T-Mobile became complacent. Their customer service, which was consistently ranked #1 by JD Power & Associates slipped and employee morale was at an all time low. Now, with Sprint waiting in the wings with jaws open, T-Mobile is operating business as usual. Actually, even more aggressive than they have in years past. As a result T-Mobile posted it’s third quarter in a row of customer growth adding 1.645 million net customers up from 1.023 million the quarter before. Business Insider’s Steve Kovach reported that T-Mobile grew more in the fourth quarter of 2013 than rivals Verizon Wireless, AT&T and Sprint.

While Sprint may be teeing up to purchase T-Mobile, Technobuffalo and the Wall Street Journal report that it is possible for the transaction to happen the other way around.

While onstage at T-Mobile’s Uncarrier event at CES, Legere told reporters he had no plans to change T-Mobile’s core business or “uncarrier attitude”, regardless of who acquires them.