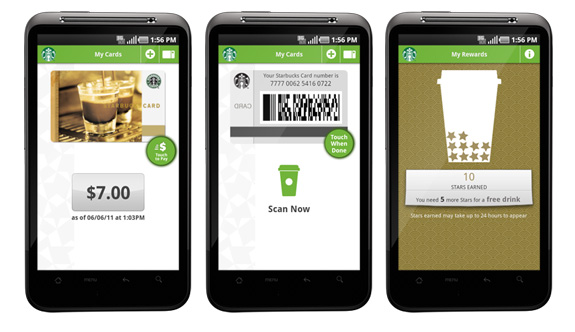 Coffee giant Starbucks revealed back in March that up to 14% of it’s purchases in the United States are paid for using their mobile app. The Starbucks mobile app allows it’s users to pre-load money onto it and then use those funds to quickly pay for Starbucks purchases both in store and through their drive-thru locations.

The app also works as a loyalty rewards app. After you open your star card account and use it five times you move up to a green level which gives you perks like a free beverage on your birthday and 15% off at the Starbucks online store. But once you make 30 purchases in a 12 month period you move to the gold level, get a card with your name on it and a free drink every 12 stars. The card can also be used at their other properties like Teavana, Evolution Fresh or La Boulange.

Starbucks continues to innovate their mobile app under the direction of the company’s Chief Digital Officer, Adam Brotman.

After his appearance at the Fortune magazine’s Technology Conference Brotman sat down with re/code.  During the interview he confirmed that Starbucks is aggressively pursuing order ahead functionality for their mobile app. They’re currently testing the feature in an undisclosed market as well as at their test store in Seattle.

Ordering coffee ahead of time is a lot different than ordering food for pickup or carry out. Starbucks takes pride in serving their hot beverages, nice, hot and freshly brewed. Let a latte or a cappuccino set out to long and that’s a recipe for disaster. Brotman explained to re/code’s Jason Del Ray that a lot more goes into this development process and Starbucks team members from all aspects of their business are meeting on a weekly basis until they get it right. Brotman also explained that this isn’t an experiment. “We will do this and we will get it right,” he told re/code.

They’re no going to stop with just order ahead functionality. Starbucks is looking at partnering with other stores to use their app as a loyalty, reward incentive. Imagine using your Starbucks app as a mobile wallet at a store like Target and then earning free Starbucks coffee for doing so. Brotman didn’t divulge any possible retail partners however Target is a major partner with the coffee chain, and houses many Starbucks Stores Within A Store (SWAS) units in their locations nationwide.

There’s no time frame for either the order ahead function or expanding to a more mobile wallet like app, although Brotman said they will get the ordering ahead perfected this year.