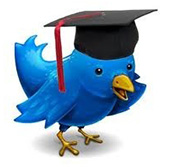 76% of twitter users access the social network via mobile phone, according to the social network. That means that even in environments where there is no pc or laptop to connect to the internet Twitter is still available, and it’s proven time and time again that Twitter encompasses a wide variety of demographics.

That’s why out of the 1/2 billion tweets posted every day an average of 4.2 million are directly related to education, meaning that they can be easily found with a hashtag or keyword search. Responses to educational tweets or off handed or slang tweets in an educational discussion may not be in the count. As we all know, with a 140 character limit some Twitter abbreviations can be hard to pick up on.

The 4.2 million number came from Twitter Account Executive Brett Baker. Baker, along with a handful of other Twitter employees, have started an educational team to sift through those half billion tweets a day and identify educators that are using Twitter as an educational tool. They are looking to find new ways to connect teachers and their students to the social network.

Some teachers are using Twitter to help students without a voice actively participate in the discussion. Eighth grade history teacher Enrique Legaspi,  featured in the CNN video below, discovered that his students were sneaking the use of their electronic devices during his history class. After attending a seminar in San Francisco on using Twitter in the classroom he uses the social network everyday.

In this case, when Legaspi asks his students a question they reply via Twitter. Legaspi projects a twitter wall onto his smart board so that he can see all of the discussion. He makes sure students are using the correct hash tags so that he, and the other students can follow along. He’s found that shy students or students that don’t like to raise their hand to participate in class, have no problem tweeting along. Legaspi also uses Twitter so that students can interact when a video is on.

Other teachers have found that they can use Twitter to continue classroom conversations after class and even at home. By coming up with their own hashtags, or lettings students tweet directly at them, teachers can continue teaching across the social network any time of the day, and just about from anywhere.