The Wolfram Programming Cloud is Live: 1st Chance to use Wolfram Language

Designed for the new generation of programmers, the Wolfram Language has a vast depth of built-in algorithms and knowledge, all automatically accessible through its elegant unified symbolic language. Scalable for programs from tiny to huge, with immediate deployment locally and in the cloud, the Wolfram Language builds on clear principles—and 25+ years of development—to create what promises to be the world’s most productive programming language.1

Not to get bogged down in the language itself, but it is such a significant advancement that more needs to be said about it. Rather than butcher it, here again is another bit of explanation from Wolfram himself:

There are plenty of existing general-purpose computer languages. But their vision is very different—and in a sense much more modest—than the Wolfram Language. They concentrate on managing the structure of programs, keeping the language itself small in scope, and relying on a web of external libraries for additional functionality. In the Wolfram Language my concept from the very beginning has been to create a single tightly integrated system in which as much as possible is included right in the language itself.

And so in the Wolfram Language, built right into the language, are capabilities for laying out graphs or doing image processing or creating user interfaces or whatever. Inside there’s a giant web of algorithms—by far the largest ever assembled, and many invented by us. And there are then thousands of carefully designed functions set up to use these algorithms to perform operations as automatically as possible…So in a sense inside the Wolfram Language we have a whole computable model of the world. And it becomes trivial to write a program that makes use of the latest stock price, computes the next high tide, generates a street map, shows an image of a type of airplane, or a zillion other things.2 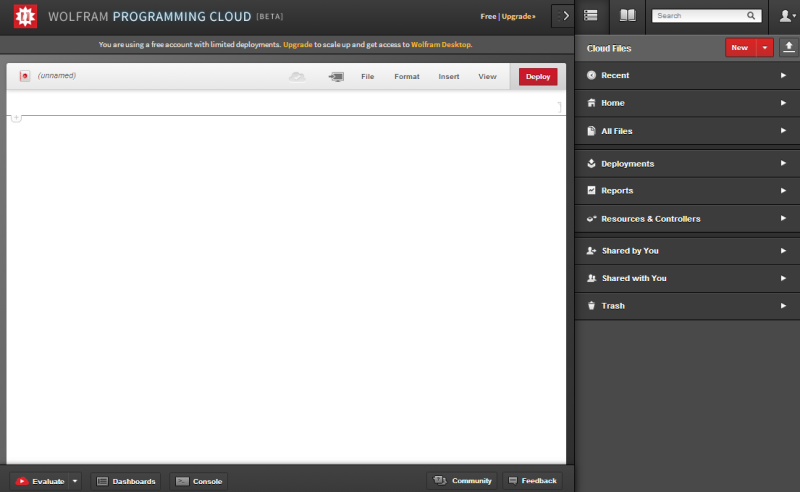 On Monday, the Wolfram Language took its first major step to becoming a reality with the launch of a beta version of the Wolfram Programming Cloud. The programming cloud is the first way to use the Wolfram Language. From what I can gather – I am no programmer – this is an incredibly robust language. You can do simple tasks like determine the language of a string of text, or plot the path of the sun, or generate random words or more complex tasks like mapping volcanic ash advisories, or make a 3D map from an elevation map, or determine the author of a text without making any calls to outside data sets. What’s more, anything that you build within the Wolfram Programming Cloud can be exported into just about any language.

Here is a video clip from Wolfram himself discussing the use cases of the Wolfram Language and the Wolfram Programming Cloud: