2014 International CES Is Going To Be All About 3D Printing, Starring Makerbot’s Bre Pettis 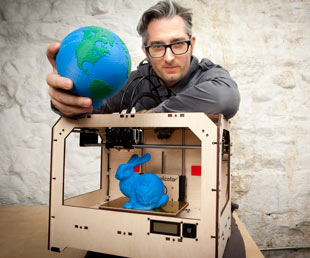 In 2009 when Makerbot was just coming out people thought Bre Pettis was crazy. “No one is going to print plastic stuff at home”. There was a certain novelty to the toys the company printed at TechCrunch Disrupt New York that spring, but visionaries clearly saw the future.

In the ensuing four years the 3D printing industry has exploded. When Pettis and his company Makerbot came on the scene 3D printers were machines that cost tens of thousands of dollars and were made for “shops”. Auto parts manufacturers, architects and other manufacturing companies used 3D printing, but no small business was going to buy a 3D printer for their office much less for their home.

Makerbot changed the game by changing people’s mindsets and kicked off an industry.

People are printing toys, cups, bowls parts and even guns (which are now outlawed) at home with a home 3D Printer.

The International CES is the largest technology expo and trade show in the western hemisphere. Every year there seems to be some big theme surrounded by some new thing. For a few years it was smartphones, then apps, then startups, then wearable tech, now it’s 3D Printing. Several companies that support the 3D printing industry and make 3D printers will be exhibiting at CES in January.

This year, Mr. Makerbot himself, Bre Pettis will keynote the 2014 CES Leaders in Technology Dinner.

The LIT Dinner will take place at 6:30 p.m. Wednesday, January 8, in the Lafite Ballroom at Wynn Las Vegas. The invitation-only event gathers and honors the top technologists, entrepreneurs and policymakers instrumental in furthering technology innovation.

“Bre Pettis’ leadership and passion for innovation have played a critical role in the success of 3D printing for both professionals and consumers – the consumer category didn’t even exist a few years ago and is now one of the biggest stories to come out of the International CES,” said Gary Shapiro, president and CEO, CEA. “We are thrilled to have Bre keynote the 2014 CES LIT dinner and look forward to hearing his vision for how 3D printing will transform entrepreneurship, business and consumer opportunities in the year ahead.”

Pettis has led MakerBot as CEO since its beginning in 2009. Prior to co-founding MakerBot, he co-founded the Brooklyn hacker collective NYC Resistor, where Makerbot technology was first created, tested and proven. Pettis was instrumental in building the first prototypes of MaterBot’s 3D printers, and has become known worldwide as a leading evangelist for personal manufacturing. In 2012, Pettis was honored with the Disruptive Innovation Award from the Tribeca Film Festival, for “creating an entire ecosystem for desktop 3D printing.” He is passionate about providing tools for individuals and organizations to create the world around them.

New to the 2014 CES show floor, the 3D printing TechZone will showcase the latest advancements in 3D printing technology from top companies in the category. Following its initial launch, the 3D Printing TechZone sold out more than 3,000 net square feet of exhibit space and has since expanded to 6,900 square feet to meet exhibitor demand.

The Leaders in Technology Program at CES allows high-level public policymakers and technologists to learn from more than 3,200 exhibitors and thousands of new products that contribute to a dynamic industry that supports an expected $1 trillion in retail sales worldwide. The program also provides information and insight to assist officials in evaluating federal policies that affect the consumer technology industry.

You can find out more at CESweb.org