Today, Fetchnotes – a TechStars backed company – is launching a major update to its iPhone note taking/productivity application. The company has grown tremendously since we spoke to them in January. They have closed a $425k round, added two full time team members – now up to six – and the app has jumped from 30,000 active users to more than 80,000. 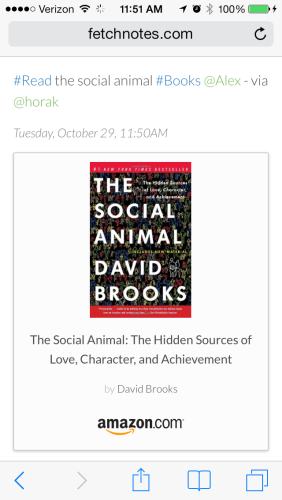 In a nutshell, Fetchnotes allows people to organize and share their notes in much the same way that they use Facebook and Twitter using #hashtags to organize and @mentions send them to other people. Since you choose the tags as you type, everyone’s experience is personalized to the way their brain naturally organizes information. Further, when you use some common hashtags like #books or #music or #video, Fetchnotes will help you complete that task by finding a YouTube link, or an Amazon product page.

Alex Schiff, Fetchnotes’ CEO, told us that they were seeing the greatest interaction in users who were actively sharing content. This sharing, Alex said, was the main motivation behind the major overhaul. Prior to the update, sharing was a bit buggy, and somewhat complicated. Further, you could only share with other Fetchnotes users. That has all changed with this update. The app now allows users to integrate their address book, allowing a much easier, more intuitive sharing experience between users and non-users via SMS or email messaging.

The update also includes some other new features. The app will now send push notifications when someone shares a note with you. There is now a powerful archive built into the application, allowing users to clean up their stream without deleting notes. Deeper, more in-depth recommendations; when sharing or adding to some of the common hashtags – as mentioned above – Fetchnotes now provides much more than simply a link. To top off the update, Fetchnotes has been completely redesigned, with a major focus on simplification and usability:

With this update, Fetchnotes has gone from a very good app, to an incredible app. The Fetchnotes team paid very careful attention to their users, and they have delivered what the users want, quite beautifully. Fetchnotes, built originally with a focus on individual note taking and individual productivity, has greatly expanded beyond the single user closed ecosystem. Though this update was no small task, Alex told us that they are planning some major additions in the very near future, including adding even more depth to the recommendations. The update is iOS first, with Android and Web updates rolling out over the next several months.

Download Fetchnotes for Free on the iOS App Store and the Google Play store.